The Greetery T.G.I.F. {Just a Note to Say Hello} 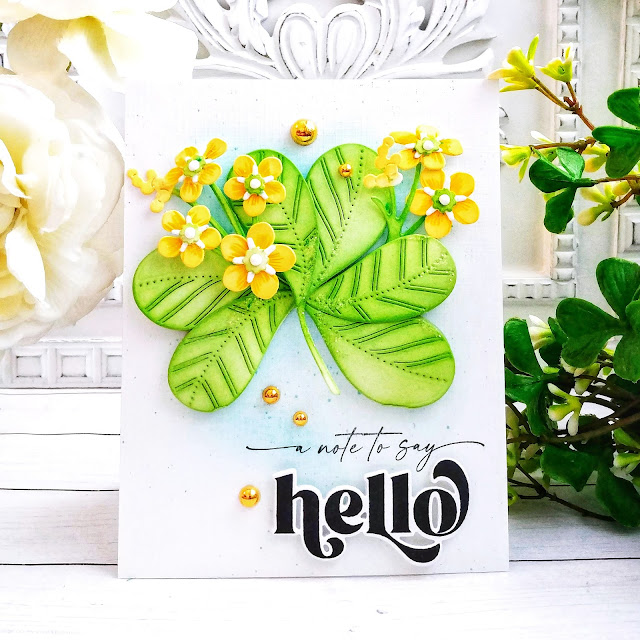 Hello friends! It’s my turn for this week’s TGIF project! I’ve been having a lot of fun sprucing up the house with spring and St. Patrick’s Day touches so I thought it would be fun to create an Irish inspired card! I love when I can use products from my stash that aren’t necessarily for a specific season and re-work them to fit my needs! In this case, I was thrilled to be able to use the smallest of the Heart Leaf Posy Pocket Dies to create a shamrock! 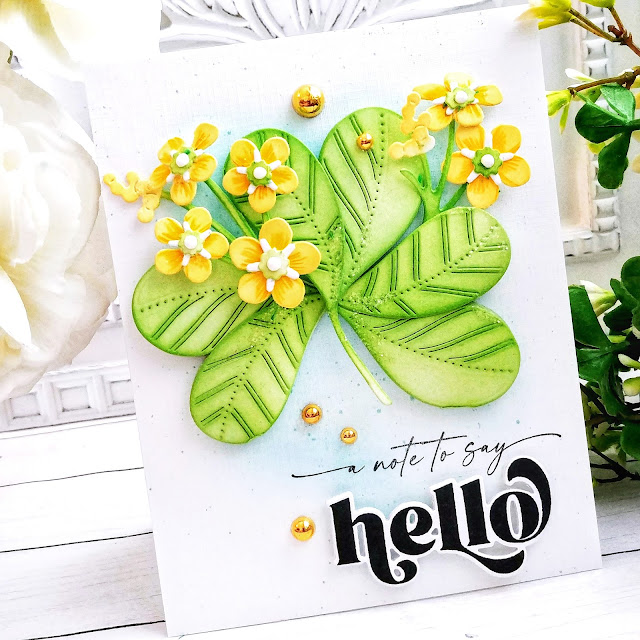 I die cut three posy pockets out of white cardstock and then added two different shades of green to each one and then secured them shut using foam squares. I set those aside and got to work creating the small yellow bouquets. I used the BotaniCuts Forget-Me-Nots Dies  and die cut everything out of white cardstock and then used yellow and green ink to add the color using blender brushes. I also added some darker yellow details using a colored pencil. Once they were all colored, I used liquid glue to assemble them together and add them to the stems. I was thrilled that one of the stems in the set worked perfectly as the stem for the shamrock as well! 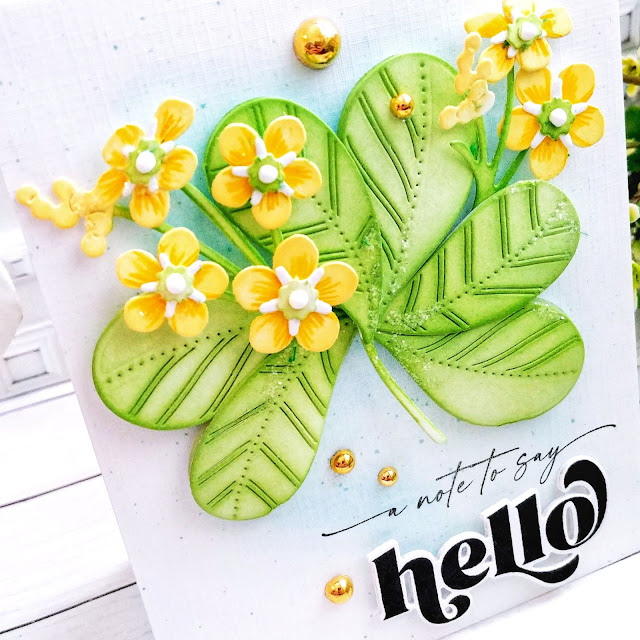 I like to use mini foam squares to attach the flowers to the stems for a bit more realism and dimension.  Once the bouquets were finished, I was able to get started on assembling the card. I cut a piece of Linen cardstock and added some light blue ink with a blender brush to the center of the card working my way toward the edges. I also added some ink splatter with an ink that is a few shades darker than the background. 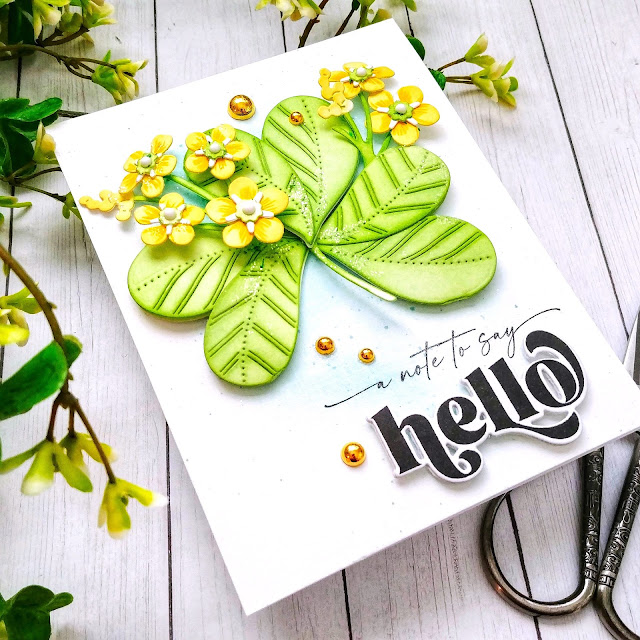 I stamped the “a note to say” portion of the sentiment, which is from the Opposites Attract Stamp Set directly onto the panel using my mini MISTI for exact alignment. I die cut the “hello” portion three times out of white cardstock using the Opposites Attract Dies . I stamped it in black and then stacked the other two die cuts to create a chipboard weight piece. I added it directly underneath the scripted sentiment using foam squares. 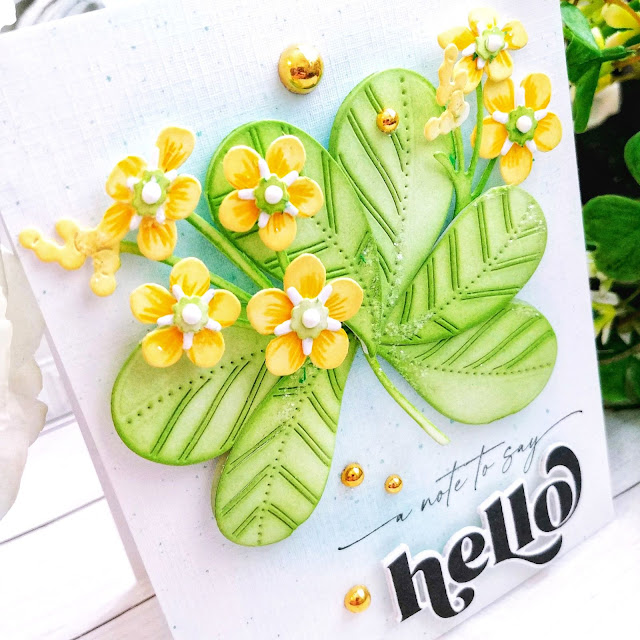 I placed the stem where I wanted it and then added the three posy pockets to the panel using foam squares. From there I was able to tuck the two bouquets here and there for added detail and embellishment. I added some glitter to the flowers and the shamrock using a 2-Way glue pen. Once that was done, I added some White Nuvo Drops to the centers of the flowers and a few gold drops for a touch of St. Paddy’s gold! You could also use some of the letters from the Alphabuds collection if you wanted something more on the St. Patrick’s Day side, like “Lucky” or “Pinch Me”. I love using alphabets to customize my cards! I had a lot of fun putting this card together! Thanks for fluttering by!

Oh, Kelly, I love this... such a creative way to use the Posy Pockets! Speaking of the Posy Pockets, my playful cat decided to swipe one one of mine from my craft room table this morning. Will have to find a way to hide the teeth marks!! I'm always inspired by your creativity. Have a wonderful weekend.

SOOOOOO pretty Kelly and how clever to use the hearts to make up your Shamrock...LOVE it!! :0)

Just had to stop by your blog and give you extra kudos Kelly! You’re so talented and creative, I’m totally in love with your shamrock card! I love that Betsy designs are so interchangeable and beautiful too! Thank you again for sharing your awesome St Paddy’s day card! I LOVE IT! ☘️💚☘️👏

PERFECTLY DONE, Kelly! I think it is GENIOUS to use the Pocket Posy Die for your Shamrock, & the little yellow flowers (Forget me nots) look like little Buttercups! SUCH A BEAUTIFULLY DONE CARD!!! ;)<3

Thank you so much!❤

Oh Debbie, sounds like you've got a mischievous cat!😂 thank you so much!❤

Thanks so much, sweet Marcia!❤

Yay! Thank you so much!❤

Awww...thanks so much, Stephanie! You're a dear!❤

Thank you so much, Becky! You're so sweet!❤

Thank you so much!❤