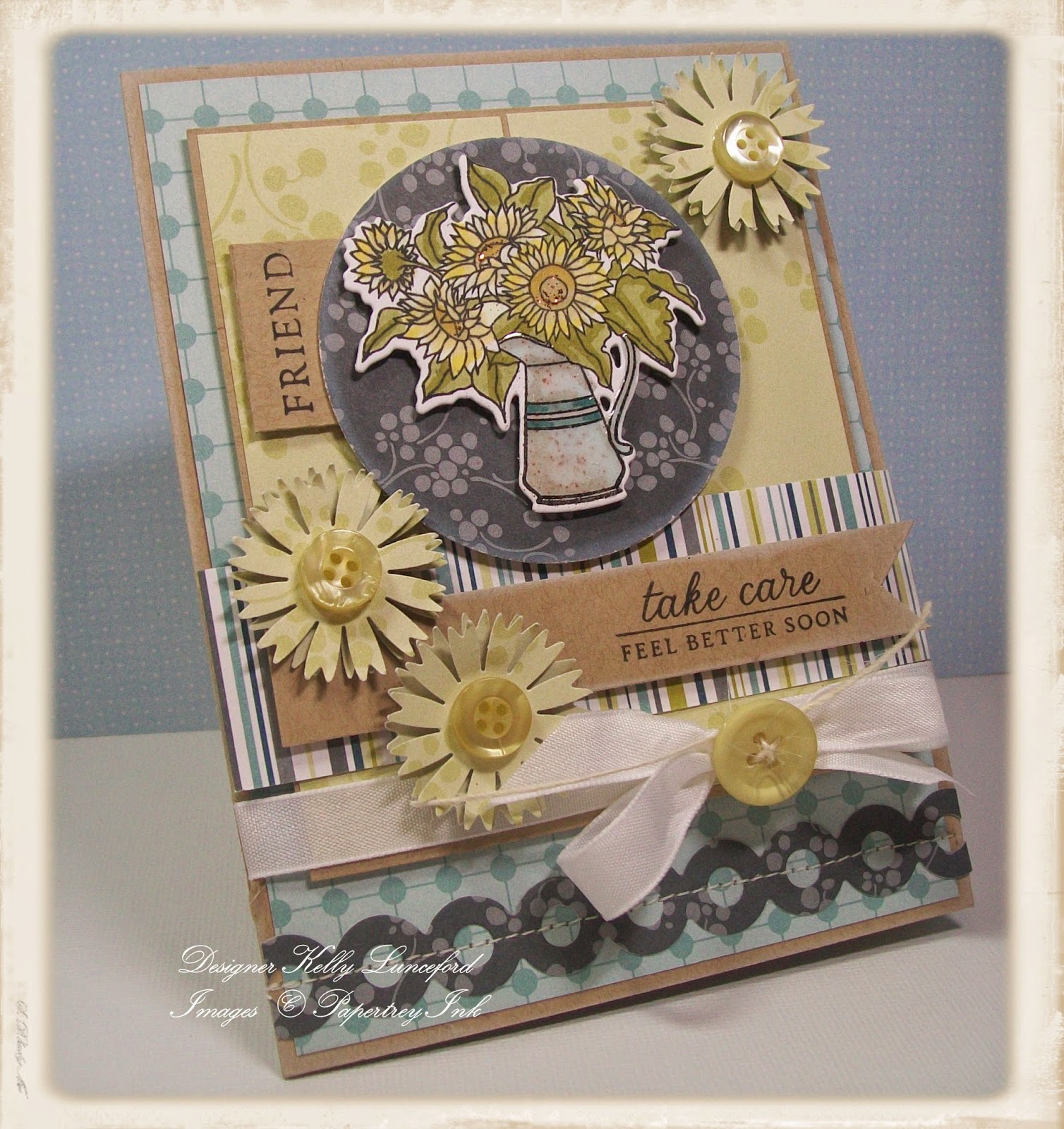 It's never fun to "need" a get well card, but I do. In fact, I generally don't make get well cards because usually the person is feeling better before they even get their card. However, the person who will be getting this will probably be needing some cheering up for a while. My "get well" sets are few and far between, but as I was searching I saw this set that I love and I don't think I have ever used this sentiment with it. The set is called "Autumn Abundance" from PTI and since it isn't even technically summer yet, I chose to use the sunflower image rather than the other two which are definitely fall. I colored the flowers in such a way that they could be a type of daisy if you wanted.  I chose to use some summery paper as well to make it cheery and bright. 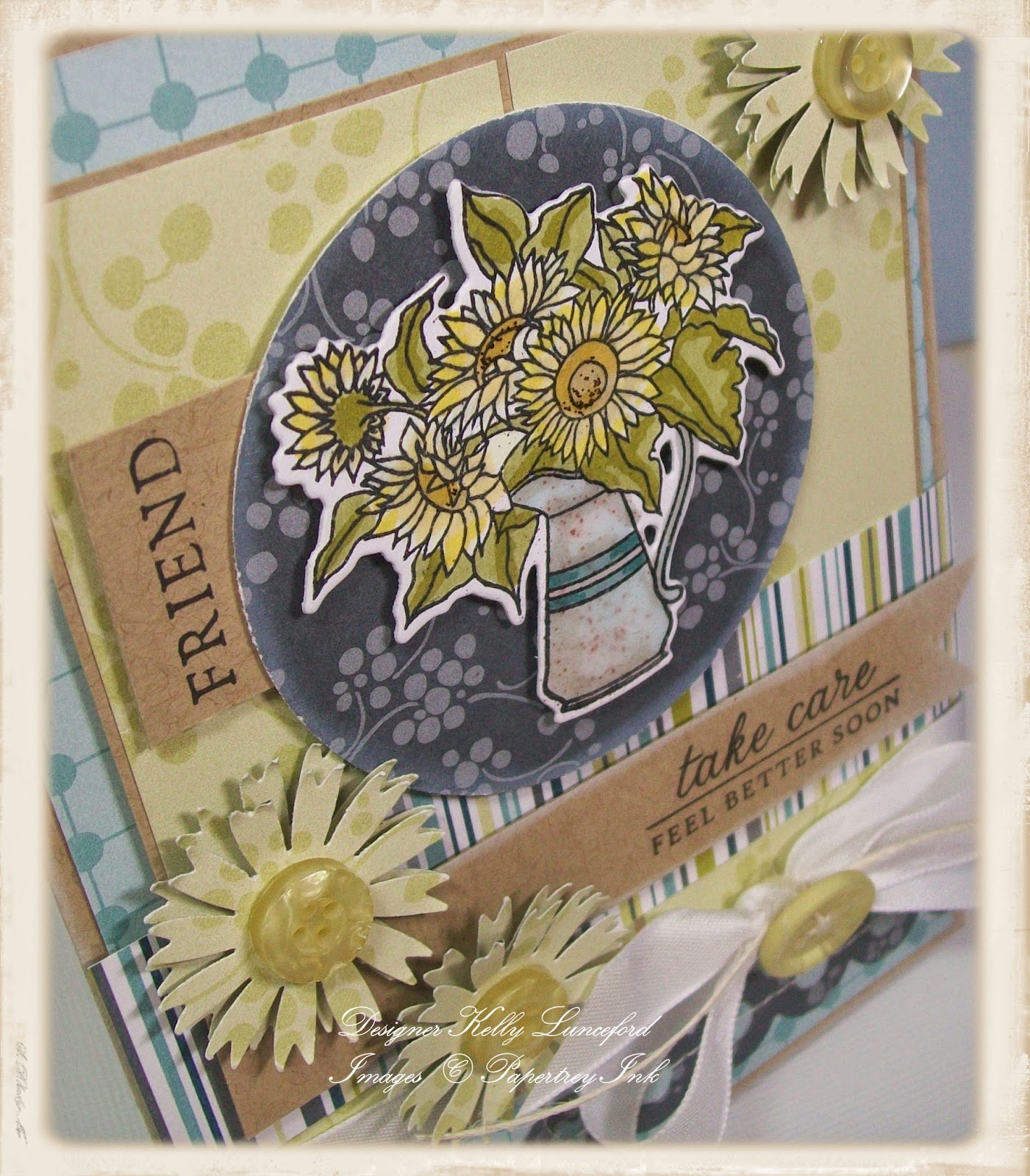 I am always more apt to use my sets that have coordinating diecuts as well. This is one of those sets. I just like that I can layer the colored image on a piece of pattern paper for more "punch". This set reminds me of a card I made a few years ago that is one of my favorites. You can see it here. I obviously didn't go into as much detail on today's card, but I wanted to give it a similar feel with the punched flowers and circle focal image. I colored the image using copic markers and then used my color spritzing tool to add some brown splatters to the pitcher. I like doing that because it makes it look more like real pottery. I also added some glossy accents to it to make it look more realistic! 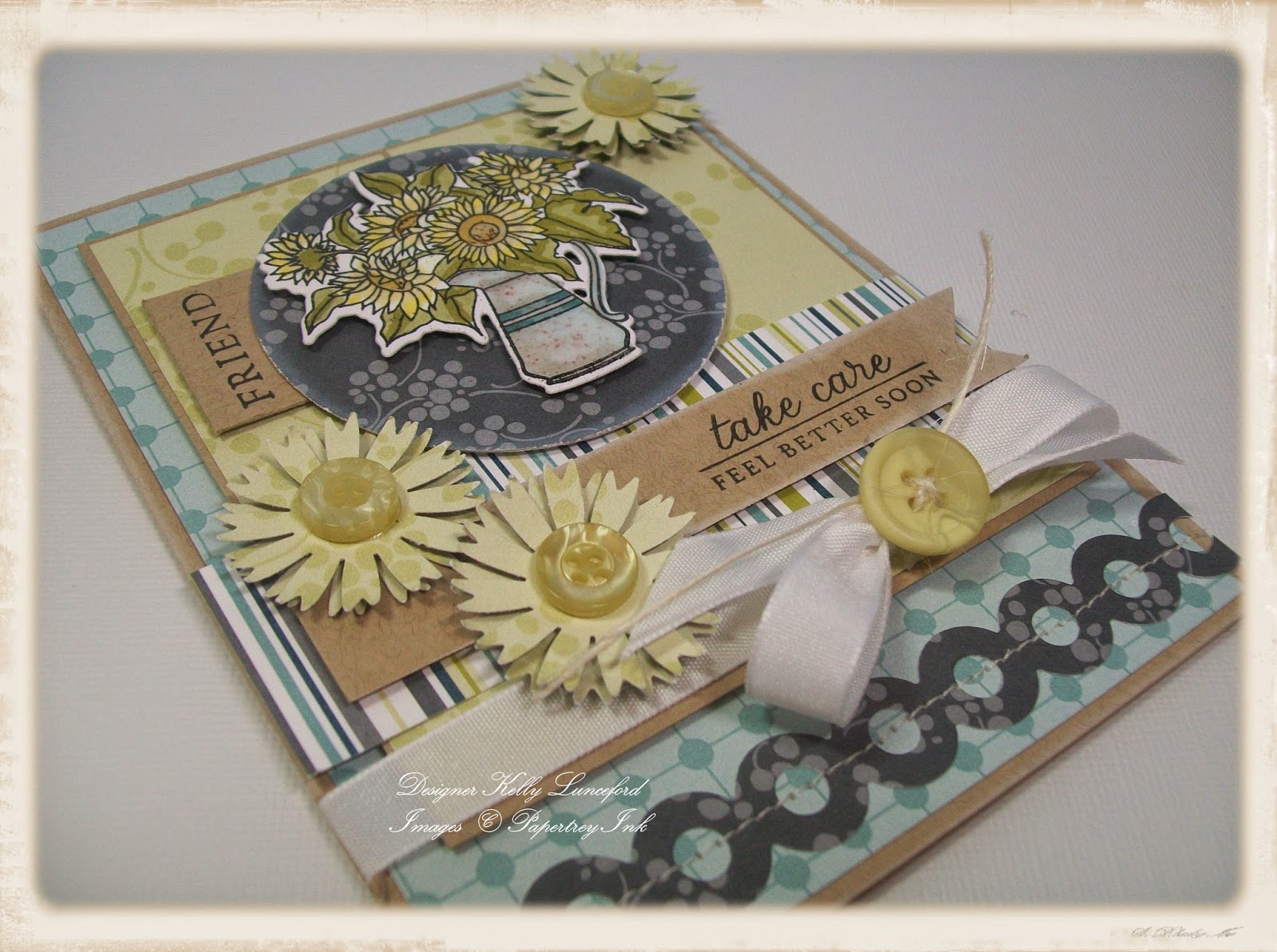 The bottom piece is diecut from pattern paper and then stitched down using my sewing machine.  I will pop this little card in the mail and hopefully it will bring cheer to the recipient and she will know she is cared about. Thanks for fluttering by!
Posted by Kelly Lunceford at 5:00 AM 4 comments: 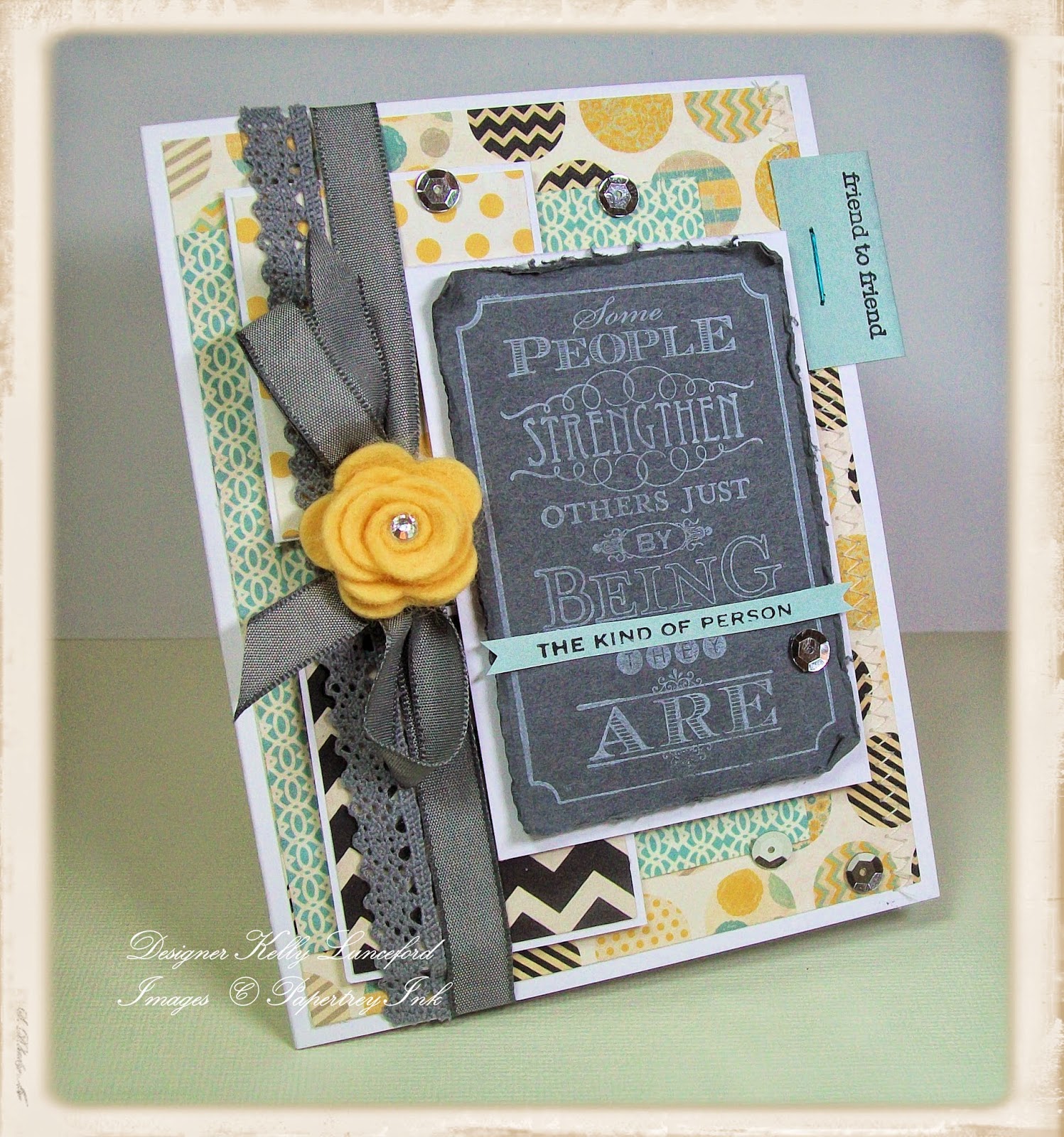 I'm a little late is saying "thanks" to my awesome neighbor who took my daughter to and from school every day...even if her kids weren't going! Yeah....she is pretty amazing! I got her a few goodies that I packaged up in cellophane and then made her a quick card. I really love this quote and I am sure I will be using it alot. P.S. I accidentally gave credit to PTI with my watermark in this first photo, but it is not PTI. I "think" it is stampabilites, but I am too lazy to go back downstairs to check it out. I will update this when I get it all worked out! :) 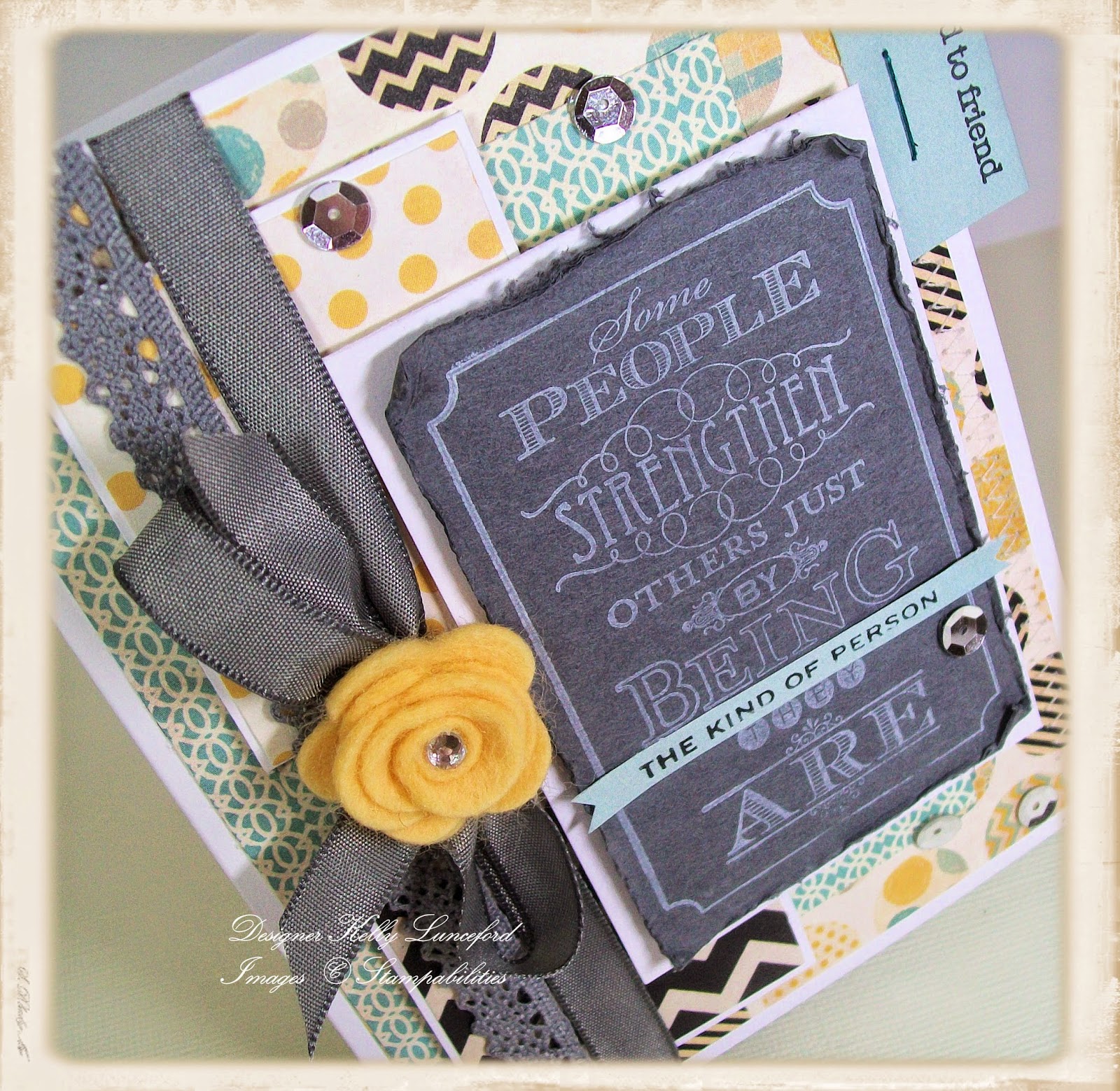 I really wanted the saying to be the main attraction, but I really love this paper. too, so I gave them both equal time to shine, I think.  You will be seeing more of this paper soon, too. I have a fun project to share with you.You will get to see a lot of the different designs. 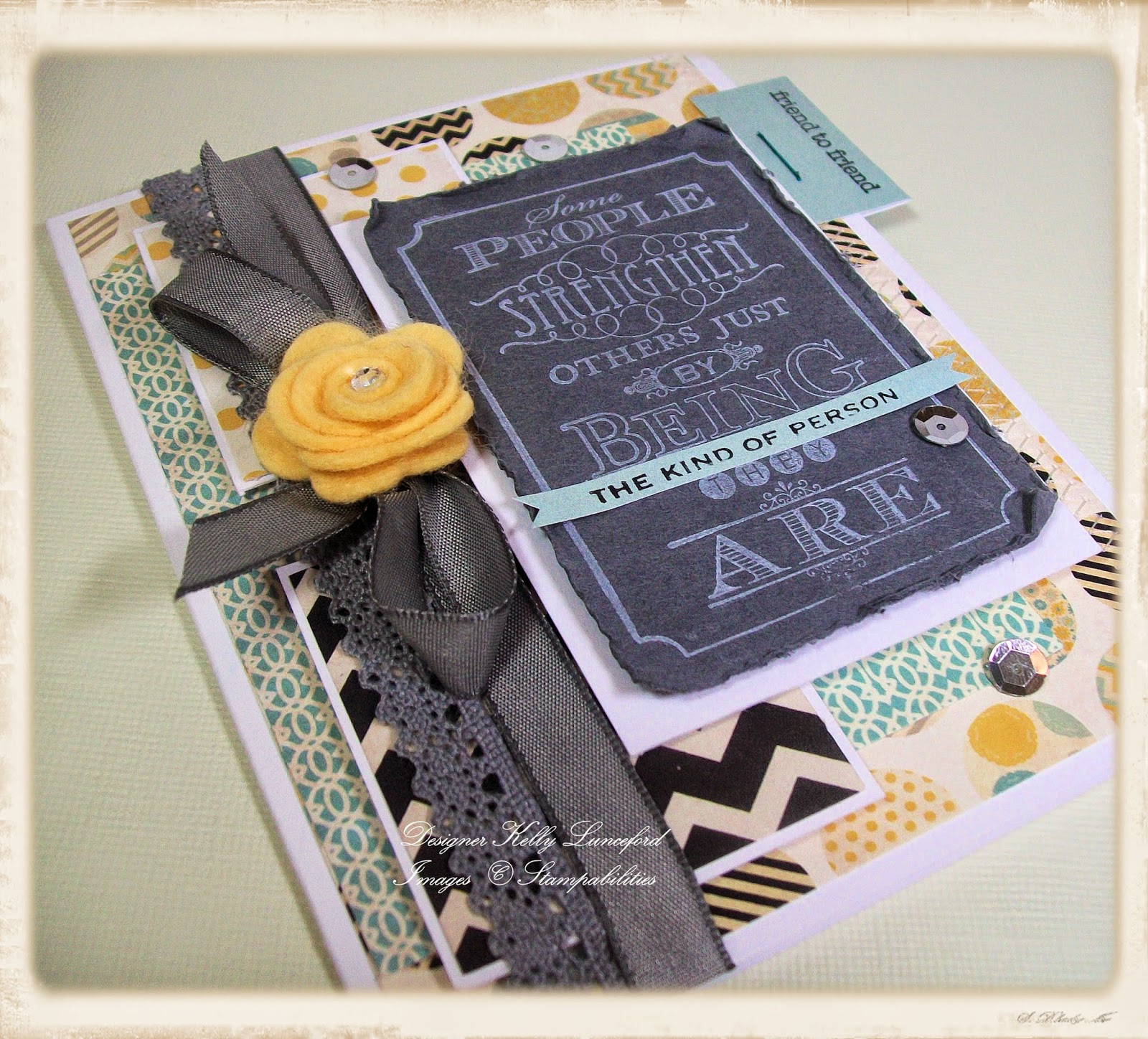 I also picked up some gray lace which I love and added a yellow rolled felt rose to the bow. My daughter was so pleased that the staple was blue, too. Um....total accident. I thought it was black. Good thing it matched. 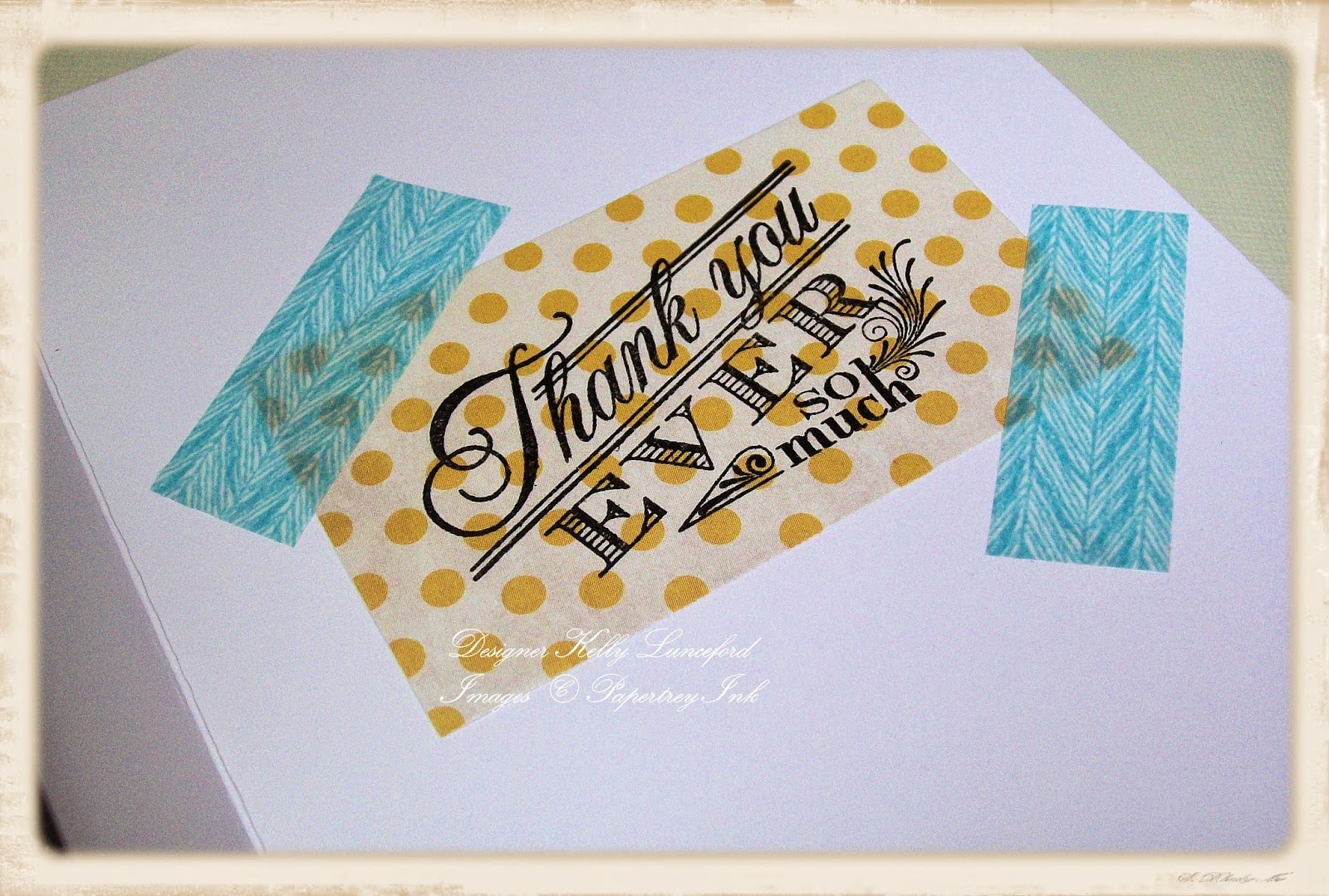 Here is a peek at the inside. I stamped the sentiment onto some pattern paper and then attached it with some washi tape.
Posted by Kelly Lunceford at 5:13 PM 2 comments:

Wishing you Rainbows and Sunshine! 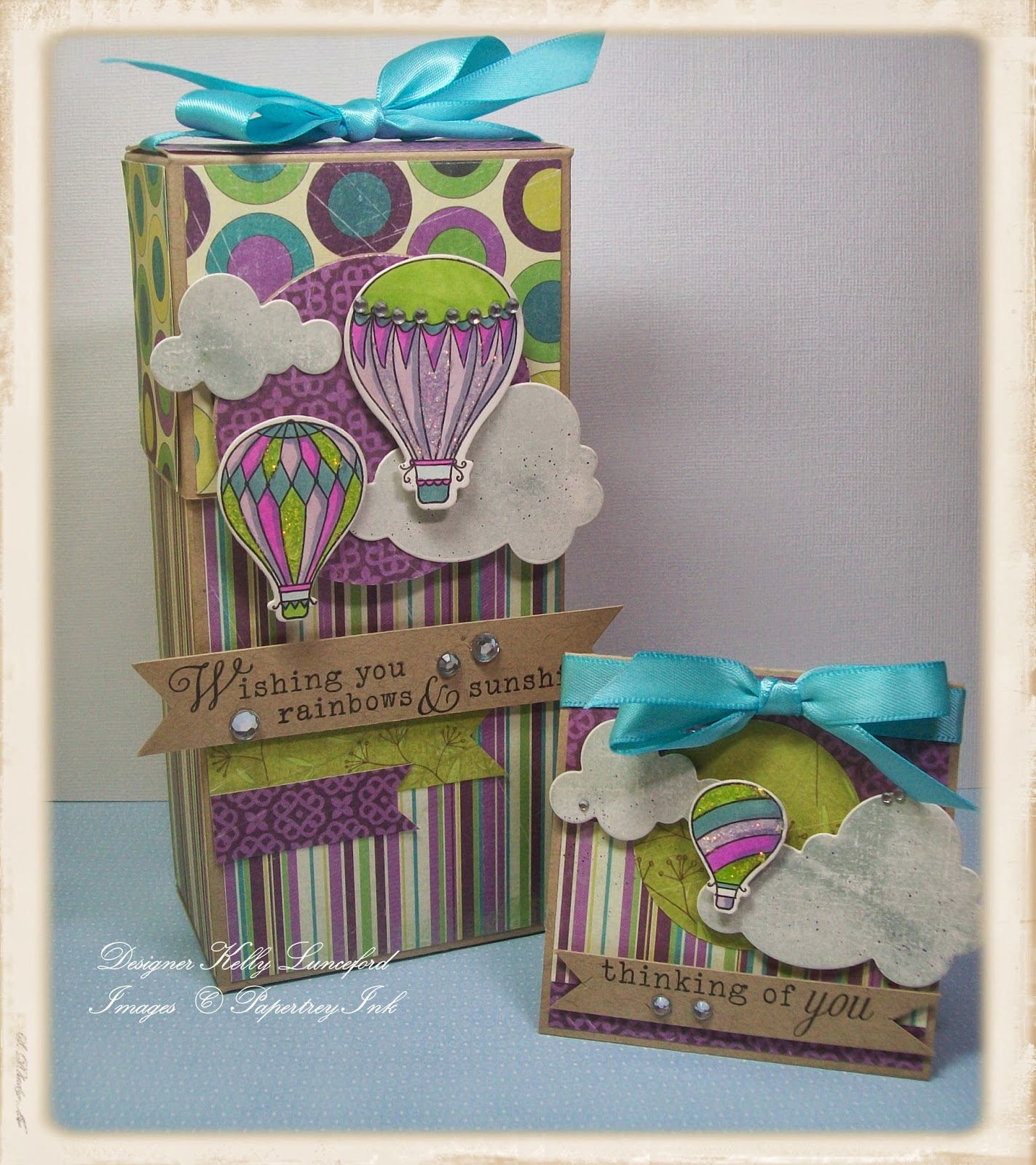 It's summer vacation and I am so excited! I have been counting down for a while now and it's finally here! I am hoping to get even more crafting done now that I will have some helpers to watch the little ones. I have a little birthday ensemble to share with you today. I really love these hot air balloons. I used some scraps that I had left over from some cards I made last spring. I am so proud of myself for using so much of my old/hoarded paper! 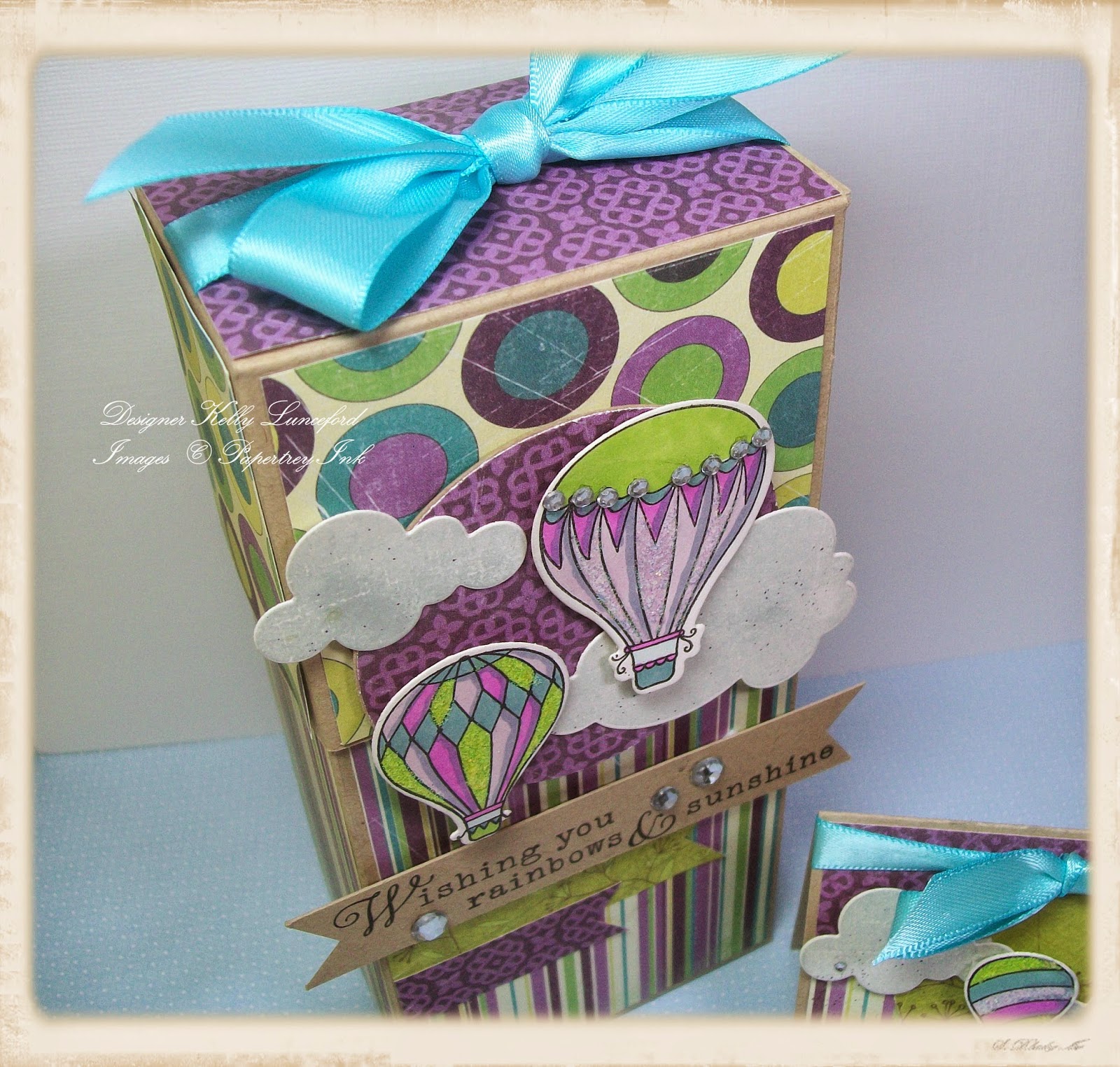 I didn't take a picture with the lid off, but all of the focal images are attached to the lid. The ribbon is threaded through the inside so that the lid can be easily taken off without having to undo anything.  The bottom sentiment is attached to the base of the box. 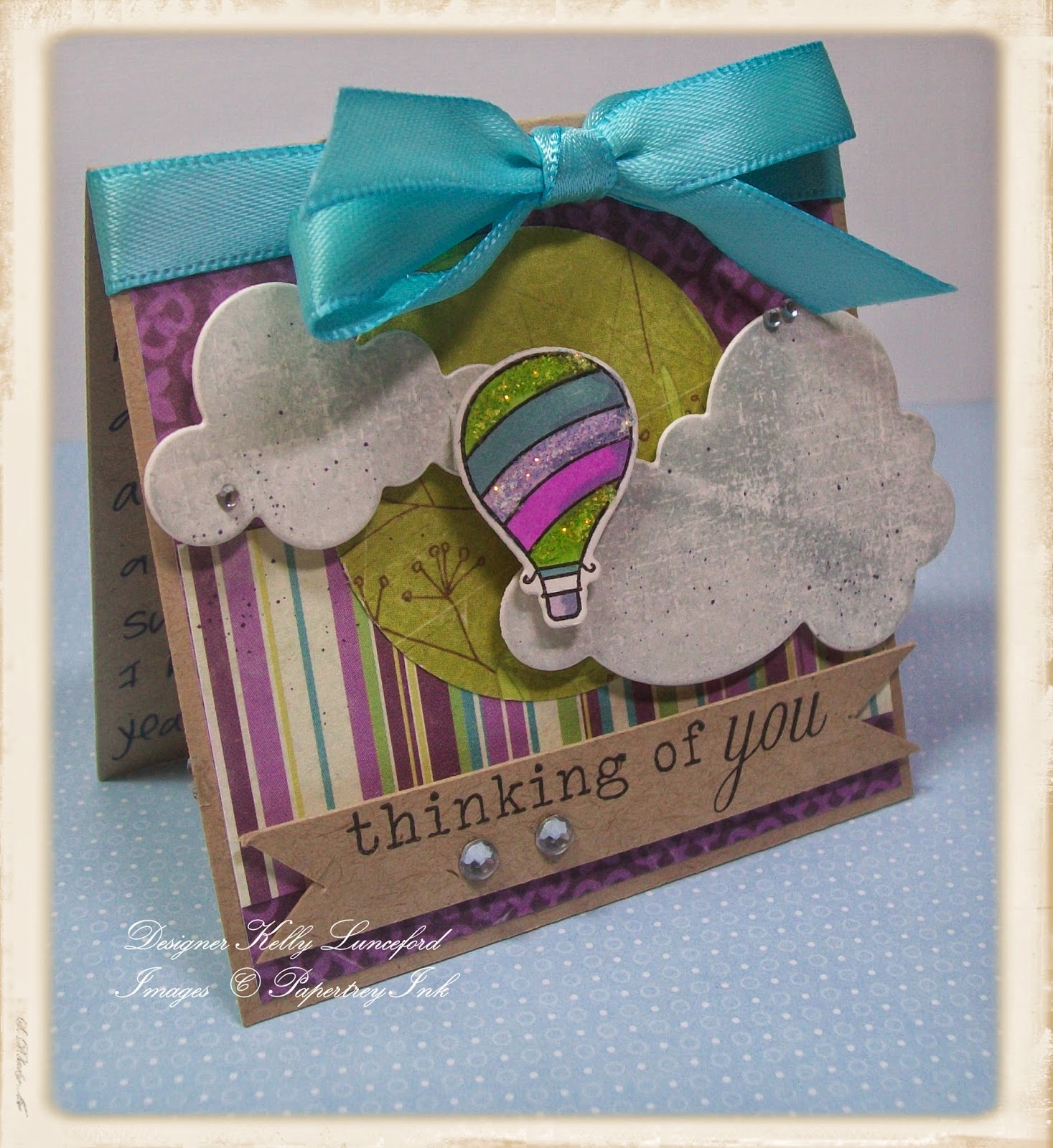 I made a tiny 3 by 3 card that I could slip inside the box with the gift. Sometimes I like having just one complete package to give rather than loose odds and ends. Not much more to say! Thanks for fluttering by and enjoy your summer!

P.S. I am needing to make a new banner for my mantel so I will post that when I get it done! I found the perfect paper...I hope!
Posted by Kelly Lunceford at 12:20 PM 6 comments: