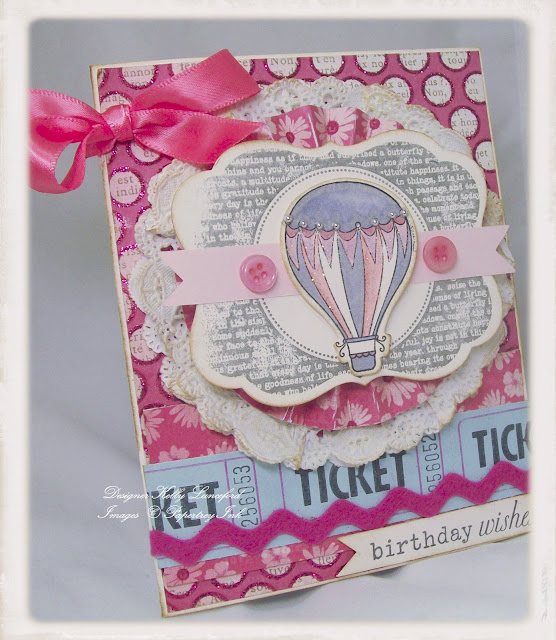 I have been so "on top" of my gift giving lately, I feel so accomplished! LOL!  One of my friends has a birthday on Thursday so I got to work making her a card. I had just completed a quick card ensemble as part of a friends gift last week, so I have been in card making mode.Unfortunately, I didn't get them photographed.  I might be on top of my gift giving, but not my photographing!  I am currently obsessed with this "Up, Up and Away" set from PTI, so of course I had to use it. I really like using the line art images that come with the set so I can do a little coloring.  I chose a color scheme that worked with the gift bag I had already bought.  It may lean toward the "little girl" spectrum, but I think we all have our little girl spirits somewhere inside; mine is just closer to the surface!!! 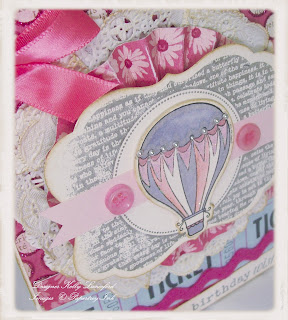 The layers on this are quite thick, so I think I will be skipping the envelope.  I am curious to see the PTI die that you can make a little box for thicker cards. Anyone tried it yet? Thoughts?  Anyway, I created the doily piece by folding four little doilies and distressing the edges. Once that was done, I added the accordion medallion. While it doesn't show that much, it really does add a bit more depth and dimension to make it pop.  The next layer is a PTI die cut and then I used the Mat stack 4 stamp set. I liked how the image didn't stamp perfectly, so it gave it an aged look. Had it come out perfectly, I would have liked that, too. But I thought that the imperfection worked nicely, too.  Before I added the balloon image, I added a little pink strip with some buttons to add another little pop. 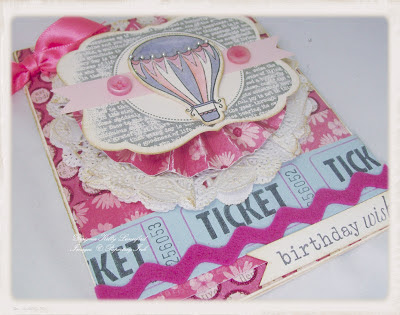 I used some tickets that my daughter brought home from a birthday party a few years ago. Those of you who have been here a while probably remember them from past creations. I like them, but they have the company name at the bottom of the tickets. I remedied that problem with some die-cut felt ric-rac. I love adding that to my cards.  It solved the problem and gave it some texture as well.  I almost didn't add any ribbon, because I couldn't find a good spot until I decided to balance the sentiment at the bottom with the bow at the opposite corner.  I was determined to get some on there!   Thanks for fluttering by!

P.S. I added a little baby ensemble here if you are interested.
Posted by Kelly Lunceford at 12:04 PM 3 comments: