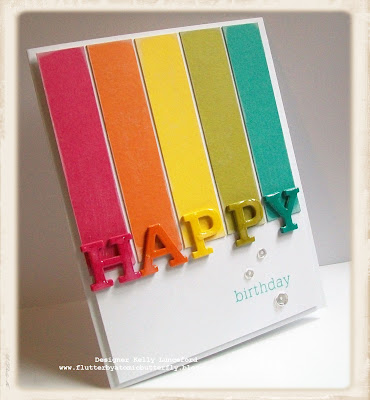 HAPPY...that one word pretty much sums up how I am feeling! We had a health scare with my 2 year old on Monday that led to days of worry, but everything is FINE! I am so relieved and thankful for the prayers of so many friends and family! I thought it would be fitting to share this card with you. This was the last card I made for the bridal shower gift and really a last minute addition. I had to go back to the store to get a tub and basket to package everything up in and one last gift sack caught my eye. So...with that being said, the glossy accents is still extremely WET in the pictures and looks like it is bubbled, but it dried perfectly! 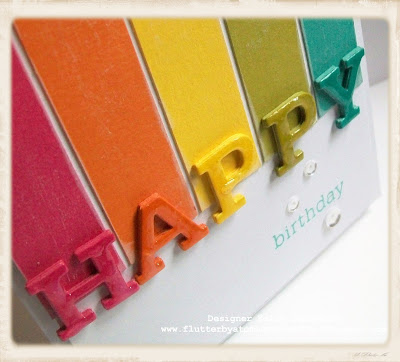 For the HAPPY letters, I die cut them out of cardstock that matched the gift sack as well as I could. You can see the sack with the card at the bottom of the post. I cut each letter 5 times and glued them together with liquid glue. Once they were somewhat dry, I added the glossy accents. 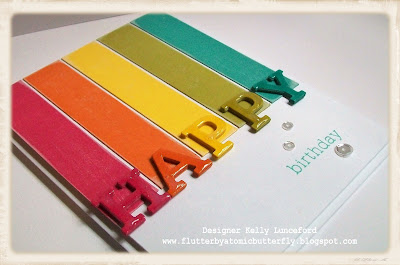 I cut strips of matching paper and added some white ink to the edges to give the appearance of paint. I also drug a dry paint brush through the white ink and then applied it to each strip to give it a painted look. I didn't trust my watercoloring skills in such a hurried project. I think the strips turned out just fine. The birthday sentiment was one I have had for a while...from PTI. When it was all said and done I wished I had used a bolder sentiment, but it was too late and I needed to GO! Ha ha! 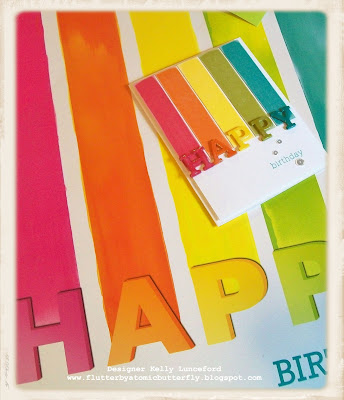 You can see the finished product with the coordinating sack. I think it turned out great and now I am thinking of all kinds of ways to incorporate this same look into future projects! Thanks for fluttering by!
Posted by Kelly Lunceford at 10:15 AM 2 comments:

So grateful for you 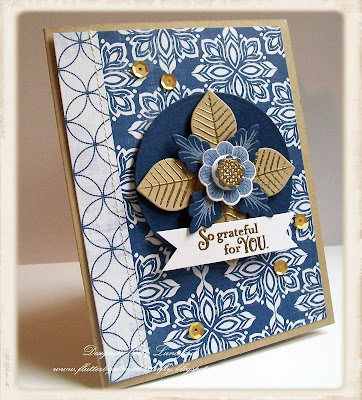 I've been busy as a little bee making cards for a bridal shower gift. The invitation asked to bring a favorite recipe instead of a card. Hmmmm....well, that really put a damper on things. No card? I was really scratching my head trying to come up with a way to break the rules and bring a card anyway. Voila! I decided to make cards as part of the gift! I went to the store and bought an under the bed wrapping paper organizer, wrapping paper rolls, tissue paper, ribbon, gift sacks, scissors and tape. The fun part? Getting to make cards to match every gift sack and gift enclosure tags to coordinate with every roll of wrapping paper. Once that was done, I was having so much fun I decided to make some thank you and thinking of you cards as well.  When I was finished with that, I decided that she could probably use some gift card holders; 4 masculine and 4 feminine. Whew! It has been a card making/crafting marathon! I've had SO much fun, though. My family? not so much. My house? not so much. I finally took some time today to catch up on some much needed house work. 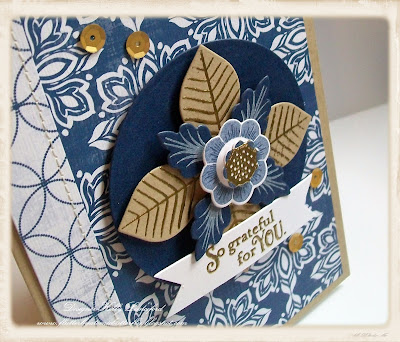 Today's card is one of the thank you cards that she will be getting. I bought a pad of pattern paper that I used for all of my kids' teacher's end of year gifts. I will share those soon, too. I didn't start this project until those were ALL done! I had a lot of fun on those, too. Rhys had his last day of preschool on Wednesday so two of them have already been delivered. Anyway, this paper is from that same pad and I really enjoyed working with it. I love how the blues, kraft and gold look together. 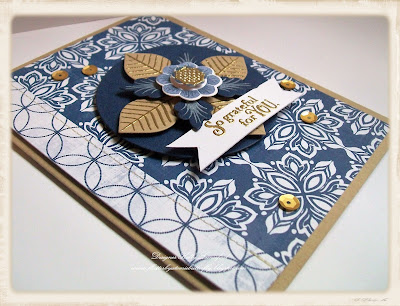 {Mom} you mean the world to me 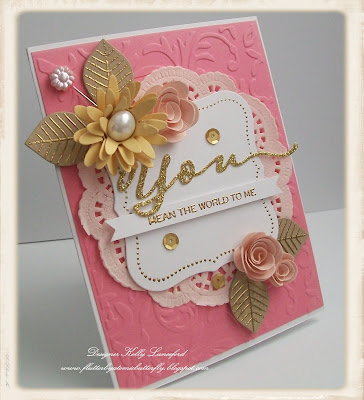 I've been up to my eyeballs in Teacher Appreciation stuff ALL week, but now that it is FINALLY over, I thought I would share the card I made for my mom for Mother's Day. It was so nice to switch gears and work on something pretty, pink and feminine...perfect for a Mother's Day design.  I made a coordinating pillow box which you can see at the bottom of the post. 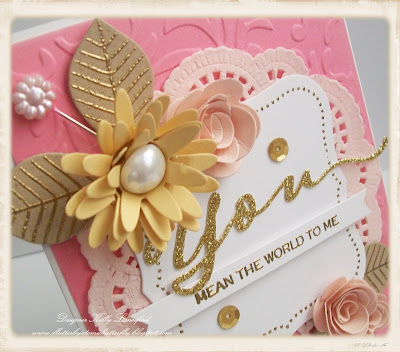 The flowers were all diecut from assorted dies from MFT. It was actually weird cutting them from paper since I generally use felt. They work up so fast when they're paper and hold their shape really well.I added a halfback pearl to the center of the daisy.  The leaves were diecut from Kraft cardstock and then heat embossed with gold for a pretty, vintage effect. I love how they turned out. 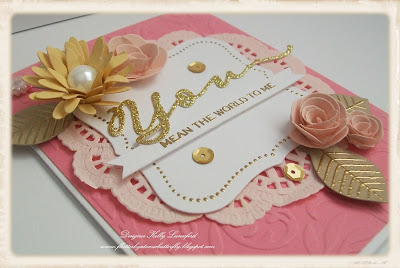 The focal piece was diecut using a Spellbinders die and then heat embossed using the "Vintage Labels" set from PTI. The scripted die as well as coordinating stamp set were also used from PTI.  I used one of the blush doilies I picked up at Hobby Lobby. I love how it looks peeking from behind the label. 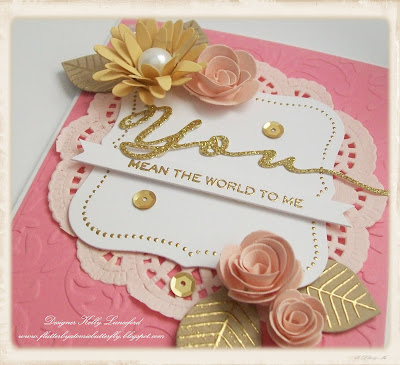 The background was dry embossed using a cuttlebug embossing folder and then I added a few brushed gold sequins for some extra shine.  I had an extra flower so I made a quick pillow box for a gift card to accompany her gift. The sentiment is very old from SU!but I thought it tied in nicely with the card. I love how everything turned out! I hope you have a wonderful Mother's Day and thanks for fluttering by! 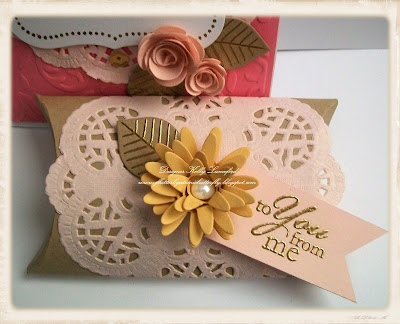 A {Bee} in my Bonnet~ Secretaries Day Luncheon 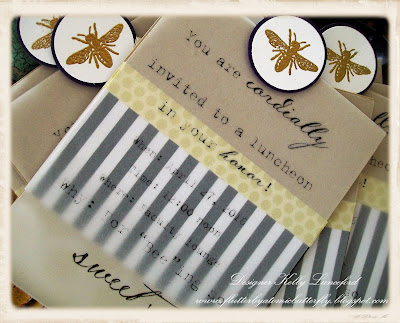 I decided to switch gears and show you what I have been up to the last week or two. I will share the other masculine cards I promised but I was so excited to share all of the fun things I put together for the secretaries at my son's school for "Administrative Professionals Day". We had a "bee" evening at church in March and I helped decorate and made some bee tags for the favors. I didn't quite get the bee theme out of my system so I decided to continue with it for the secretaries. Last year I did a strawberry theme which was super fun, too. 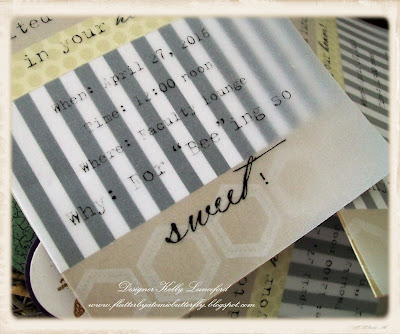 You can see the honeycomb detail at the bottom of the invitation here. I thought they turned out cute. I really liked the vellum overlay which softened the whole look. I know that was super popular in the early 2000's but I thought it worked nicely with this. 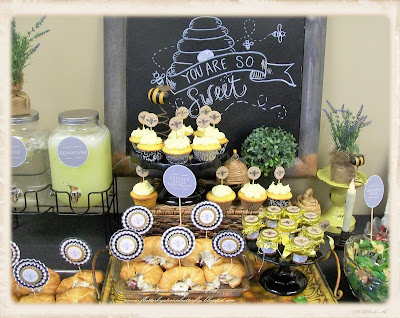 I do apologize for the photos. I was so excited to get photos taken but by this point, I had teachers coming into the lounge to eat their lunch and I realized later my camera was on LANDSCAPE! GRRRR....I was NOT happy. I worked so hard on everything and then my pictures didn't turn out. At least you can get the overall feel of the luncheon. 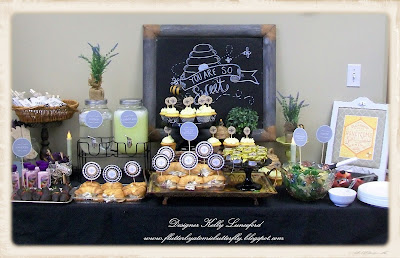 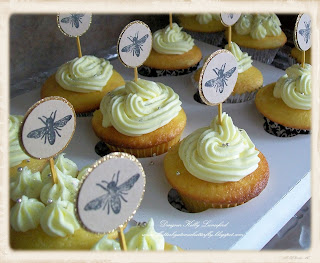 Here is a photo of the cupcakes I shot before I headed down to the school. The toppers were made by stamping the bee image which is from Anna Griffin onto kraft cardstock and then attaching it to a gold glitter paper hot glued onto tooth picks. I ended up not liking how the frosting cam out on the swirls..it was KILLING my hand because it was so thick and I didn't have control. I switched to the cute little peaks which you can see in the left corner. I added edible glitter and silver balls for some fun sparkle. 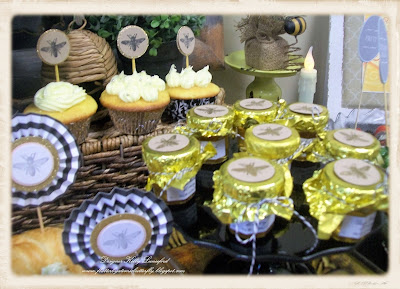 I ordered these adorable honey jars from amazon but I didn't like the blue gingham lid so I added some gold foil candy wrappers (found in the candy making section of Hobby Lobby) attached with black baker's twine. 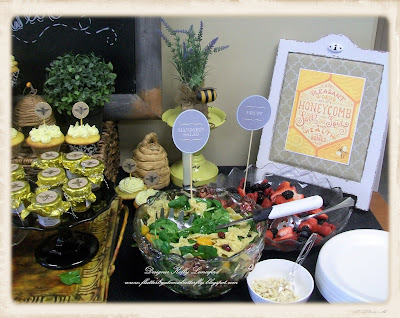 I was so happy to use some of my "pins" from Pinterest for the cute honeycomb printable on the bulletin easel and the awesome food signs. I actually ended up tailoring my menu around the printables since they were so cute. If you would like the links to any of these, just comment and I will add them. The notebook tags below were printables as well. 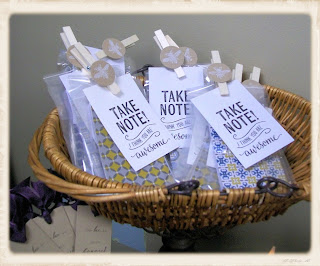 I love this quote so much: The bee is more honored than other animals, not because she labors, but because she labors for others. I thought that was so fitting for the cute secretaries. I decided to make some book marks which are super hard to see. I had a lot of fun putting this luncheon together. The teachers were super jealous but I assured them that they would be getting all kinds of fun things during teacher appreciation week which starts tomorrow. Look for a post recapping all of that fun next weekend! Thanks for fluttering by! 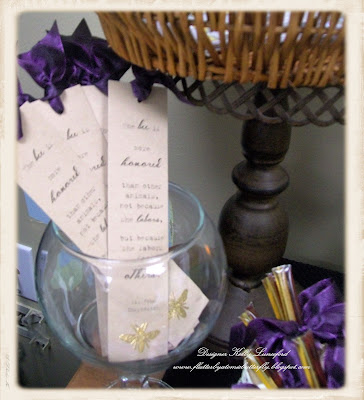