Papertrey Ink Throwback Thursday {Thanks, Coach} and a small giveaway! 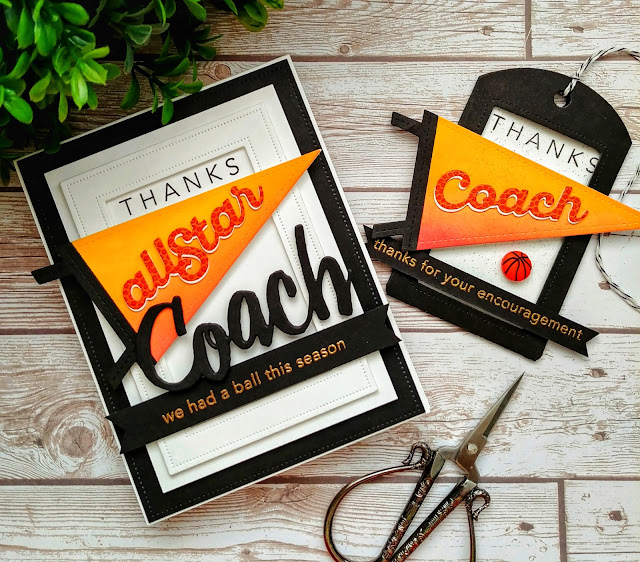 Hey friends! It feels like it's been forever since I last checked in! I hope you're all having a fabulous week and enjoying some spring like weather {maybe}. We're having the usual March weather; warm-ish one day and cold the next! LOL! Today I'm sharing the Papertrey Ink Throwback Thursday post, which is always fun! It gives us a chance to breathe some new life into an older set and share some fresh inspiration! 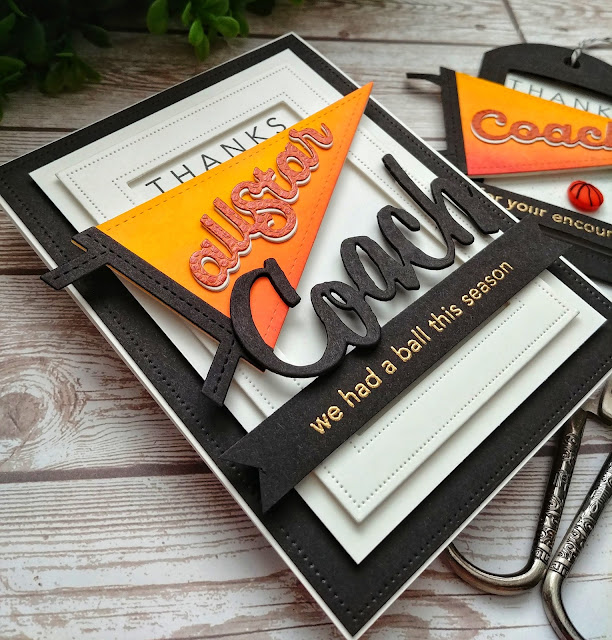 My 7 and 9 year old boys just finished their basketball season, so I always like to put together a thank you gift for their coaches. My 7 year old's coach was Dad and Grandpa; I gave Grandpa a gift and my husband felt left out! LOL! I just thought he wouldn't want all the treats I was giving! I got the big popcorn buckets from Dollar Tree and filled them with microwave popcorn packets and lots of theater sized candy as well as a few codes to RedBox. This card and tag ensemble was made for my 9 year old's coaches {husband and wife} so it worked out perfectly! I started off with the Thanks, Coach stamp set to heat emboss the "we had a ball this season" sentiment in gold onto a strip of black cardstock. I also used the "thanks" sentiment at the top that is also from this set. I love the clean lines and fonts of this set. It's a classic that will always be relevant for making coach themed cards and gifts. 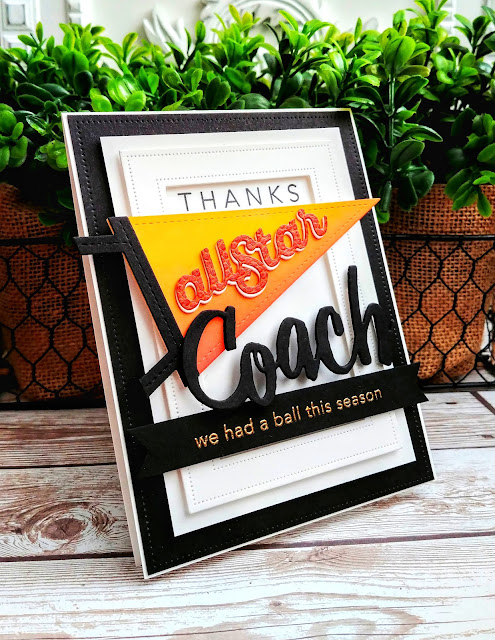 I inadvertently ordered 2 of the Thanks, Coach die and I have one that I would like to give away.  Simply leave a comment at the bottom of this post and I will randomly pick a winner on Saturday! I will throw in some extra goodies as well! For my card, I die cut 3 of them and stacked them together using liquid glue for stability. 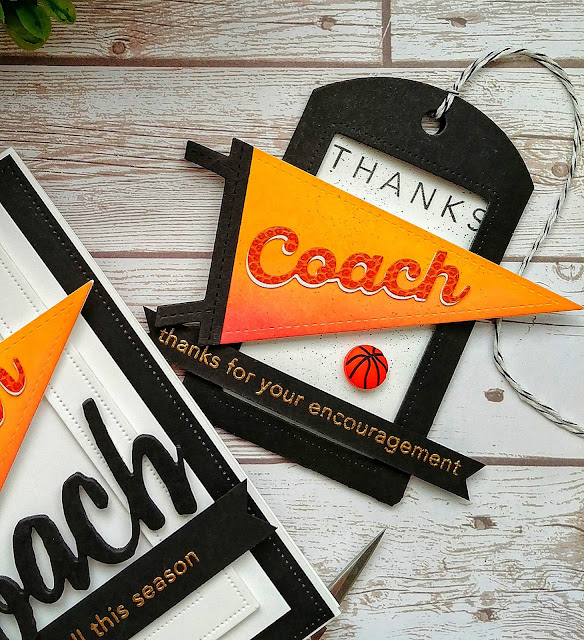 The pennants were my favorite to make! I die cut them using the Pennant Flag Die and cut three for each project; the tag and card. I wanted them to be sturdy. The black portion is only die cut once and added using liquid glue. I used an assortment of Distress Oxide inks to get the blended look. The Utah Jazz was bought by Larry H. Miller from New Orleans clear back in the day, so the colors have always been Mardi Gras colors. They recently added in some new uniforms with these orange/red colors, which are definitely more "Utah" colors! LOL! Since our city teams are the "Jr. Jazz" I decided to give the project a Jazz flair!
The tag was die cut from black paper using the Folded Pocket Tag Die. The white portion is actually an insert in the pocket with the red box codes written on it. 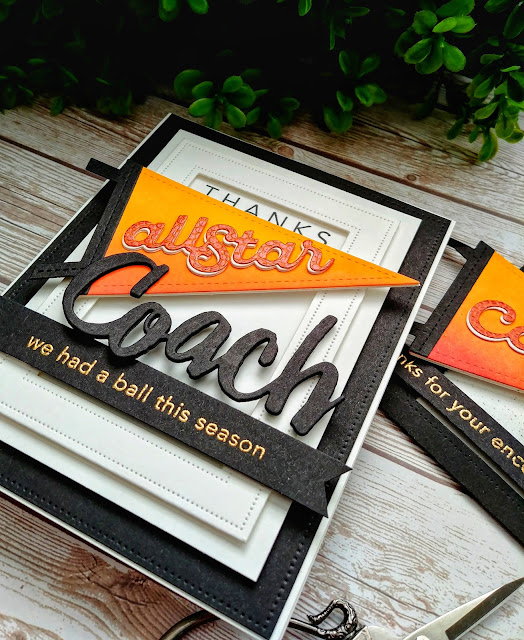 I die cut the word "coach" and  "allStar" using some basketball textured specialty paper for some added detail. My son said it is football textured paper, but I wasn't in the mood to hear it! LOL! I also die cut the same words out of white to give the shadow effect. I just simply glued them slightly offset from each other to give that extra detail. All of these elements are added onto a white frame that is die cut using the amazing Pierced Feature Frames. I also used the Nesting Basics: Pierced Rectangles die to give the black piece some extra detail as well. 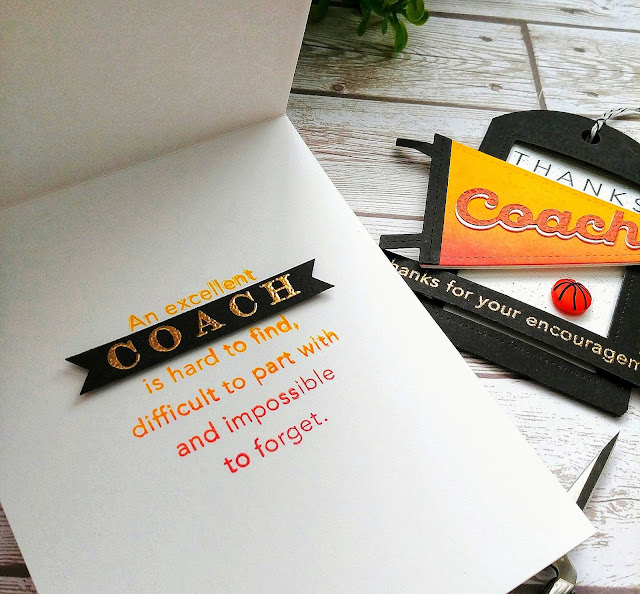 I didn't want to neglect the inside since this set comes with a fabulous sentiment. It can be used on the front or inside; I chose the inside. I used the same inks as I did on the pennants to give it that gradient effect. I heat embossed "coach" using the same gold powder as the front.  I also added some grey ink specks to the front of the tag using my color spritzing tool. A small basketball button bought from the craft store finish off these two designs! Thanks for fluttering by and don't forget to comment for a chance to win!

Always great projects, Kelly. Thanks for sharing your creativity.

What wonderful projects!! You make me wish I had a need for these stamps and dies :)

Wow, you captured so many details Kelly! I am sure they are appreciated! My husband and I coached multiple sports while the twins were growing up, it is a big time commitment, but very rewarding!

Your creativity always wows me. Your attention for detail and the pure love you clearly put into your creations is just beautiful. Hope you're having a great week.

Love this! Coaches are so deserving of recognition. This is a great idea. Thank you for sharing your creativity.

I don't need to be in the giveaway but just wanted to pop by and say these are both amazing and the coaches will be thrilled to get them, I'm sure!

Love your card and tag! The pennant makes them awesome!
I'd love to win!

Hi Kelly ! Maybe it’s the time zone change that I feel like you - has it been that long since I’ve stopped by!.? :) I just left a comment on the PTI website that you bring wonderful designs to any occasion and that includes sports! What a great way to give our thanks to the coaches in our life! And my thanks to you!

What a great update on this set of cards and tags! Loved the colors you used .

Kelly, I too popped in to let you know what an awesome job you did with these cards. Unfortunately, I don’t have a need for this set but wish I did after seeing your project. Love the vibrant colors...so striking!

What a wonderful card and tag!

Wonderful cards for the coaches! Love the black and orange colors you used - they sure pack a punch! Great designs on card and tag!

Wow this is total eye candy! You did a great job with this!!

Such an awesome card and tag! The color combo really packs a punch.

My oldest son is just getting into sports so I am going to be needing some "coach cards" soon. Thanks for the inspiration!

This is a fabulous set and so versatile! I love the colors. I would love to win this set! thank you for the chance.