SugarPea Designs STAMPtember {Merry Christmas...from our home to yours} 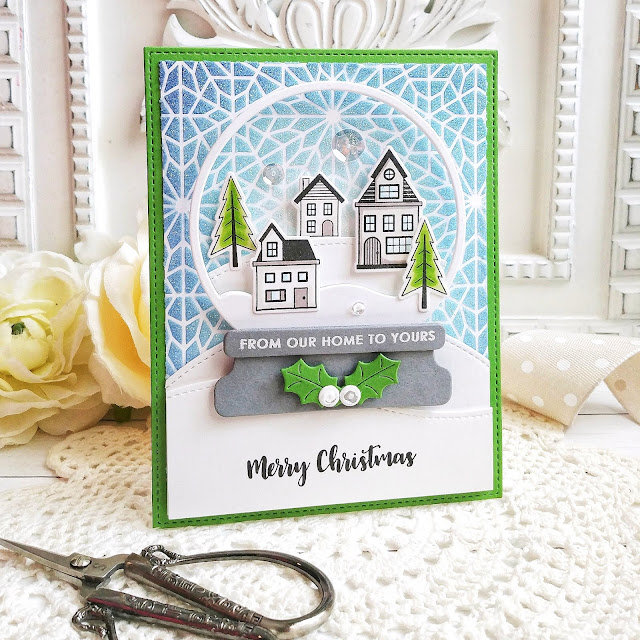 Hello and welcome! I'm thrilled be sharing yet ANOTHER amazing Simon Says Stamp collaboration for the STAMPtember event with SugarPea Designs! This new set is called "Nordic Village" and works so well with all of the NEW RELEASE products! I couldn't resist adding quite few! As always, these are limited edition sets and when they are sold out, they are GONE! This is one you definitely will NOT want to miss out on! This one will stretch far beyond Christmas and will pair perfectly with the Warm Welcome stamp set. 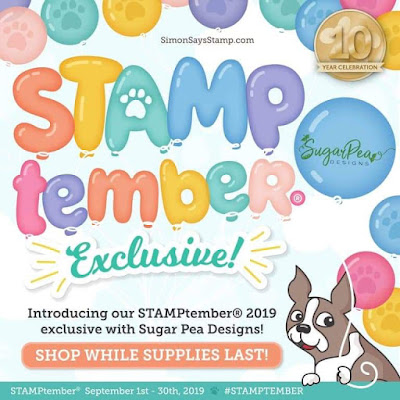 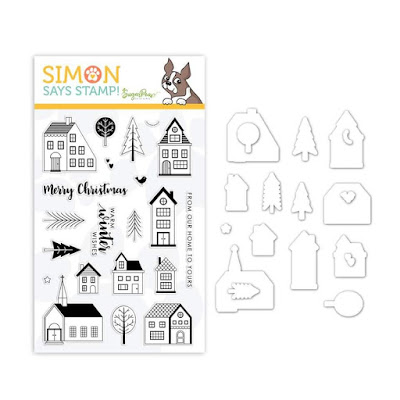 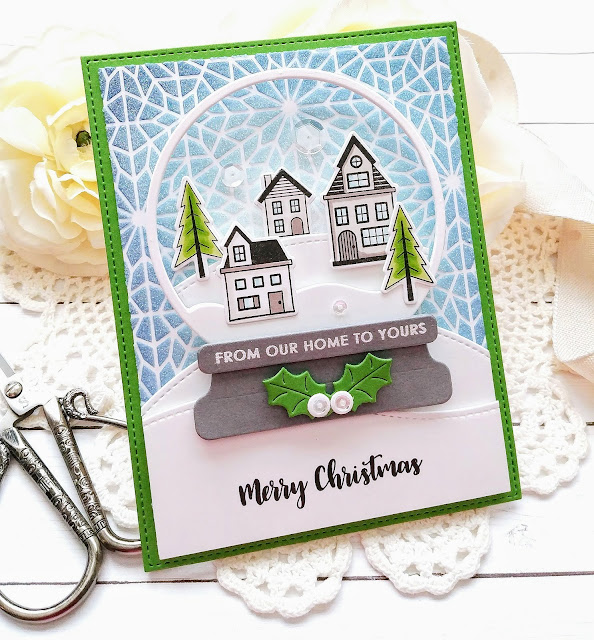 Of course I'm in full blown Christmas crafting so I was eager to use the Christmas sentiment paired with "From Our Home To Yours"! This card was a joy to make even if I did run into a few snags! LOL! I'll explain my design process and hopefully with some of my tips you can avoid any of my mishaps! ha ha! 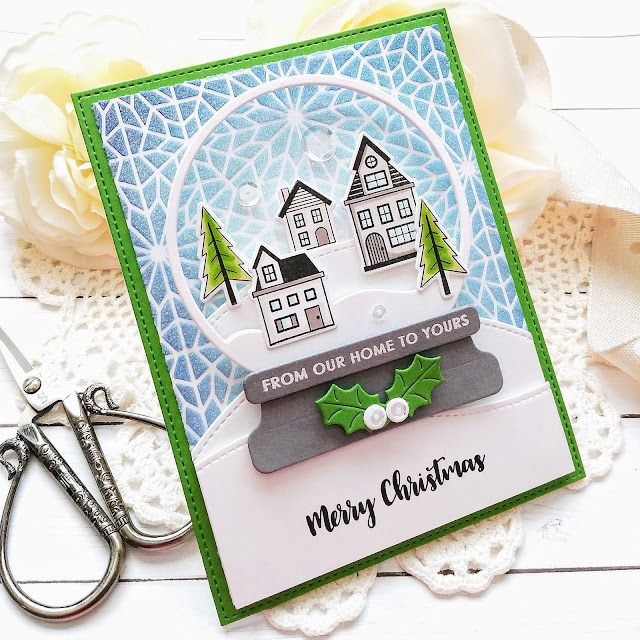 As I mentioned earlier, the name of this set is called "Nordic Village". The new Geo Snowflake Stencil has a Nordic feeling to it, so I decided to use it for my background. If you recall, I used the same stencil and technique on THIS card, but kept it a little lighter for a more "daytime glow"! LOL! To begin the background, I prepared my work surface by putting down a large piece of grid paper and sprayed my stencil with Pixie Spray. I let that set while I got my panel ready to go. Once I had it measured and cut, I placed it on the grid paper and then carefully lined the stencil up where I wanted it. The Pixie Spray really grips the paper so that you can blend your ink and Glimmer Paste easily without any fear of it coming up. I used Tumbled Glass and Faded Jeans Distress Oxide ink to blend and then Moonstone Glimmer Paste over the top. 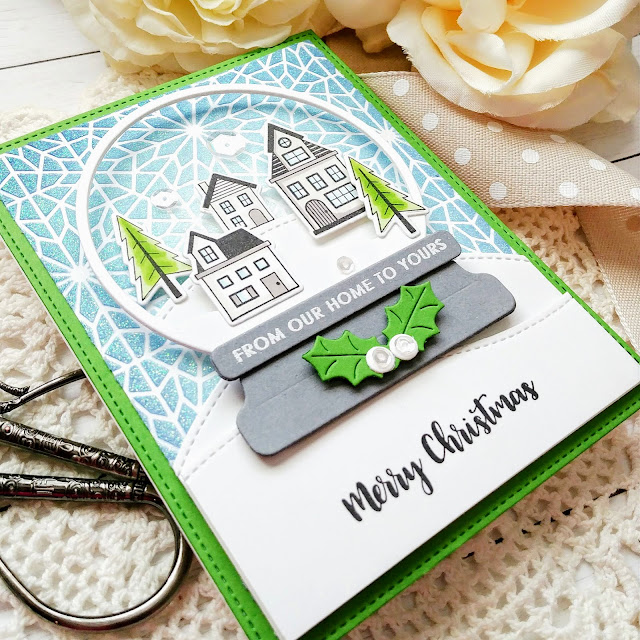 I set the panel aside to dry so I could clean my stencil and tool. I like doing this step first so that it can dry while I am working on the rest of the elements. After that was done, I got to work creating the snowdrifts that are at the bottom of the card. I did this by die cutting pieces of white cardstock using the Card Front Element Builder SugarCuts. At this point, you will want to stamp the "Merry Christmas" portion on the snowdrift. I decided when my card was COMPLETELY finished that I wanted it here and ended up ruining it. I carefully removed it and made a new panel, SOOOOO....do it at this point rather than later! ha ha! 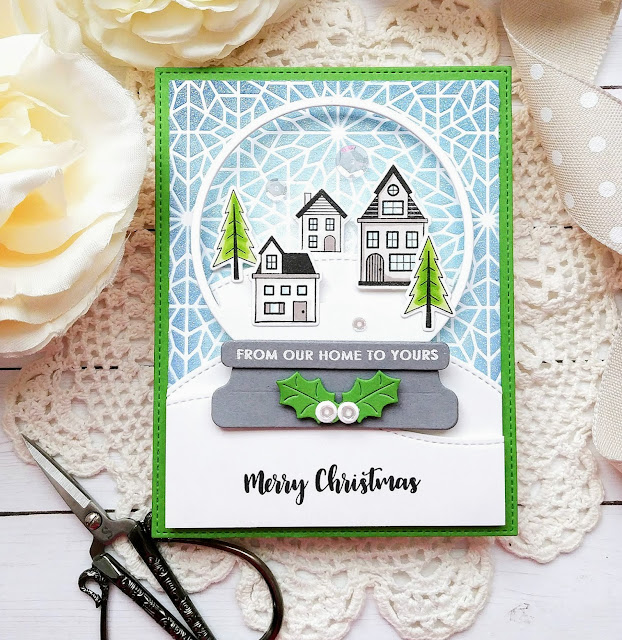 After the snowdrifts were done, I set them aside and die cut the pieces for the Snow Globe. I die cut the outer circle portion three times as well as the base and the portion that has the white embossing on it. I stacked them together and adhered them using liquid glue. I also cut an additional snowdrift portion for the inside of the globe just like I did for the bottom of the card, but once it was cut, I used the circle portion of the snowglove to make sure it would fit nicely inside. 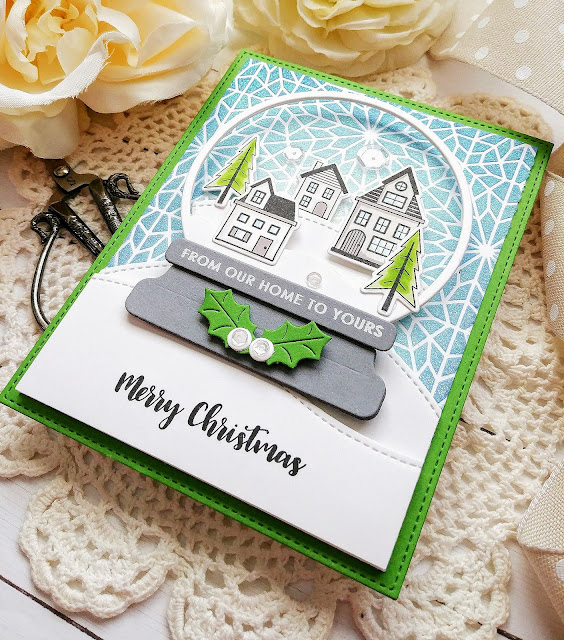 I stamped the images from the "Nordic Village" stamp set using black ink and then colored them with my Copic markers. I did minimal stamping to give them a light and bright look to keep the card cohesive. I used the coordinating die cuts, which you can purchase in the bundle on Simon Says Stamp's website. The Holly leaves and berries are from the new Christmas Characters SugarCuts. I added some tiny sparkling sequins to the center of each berry. 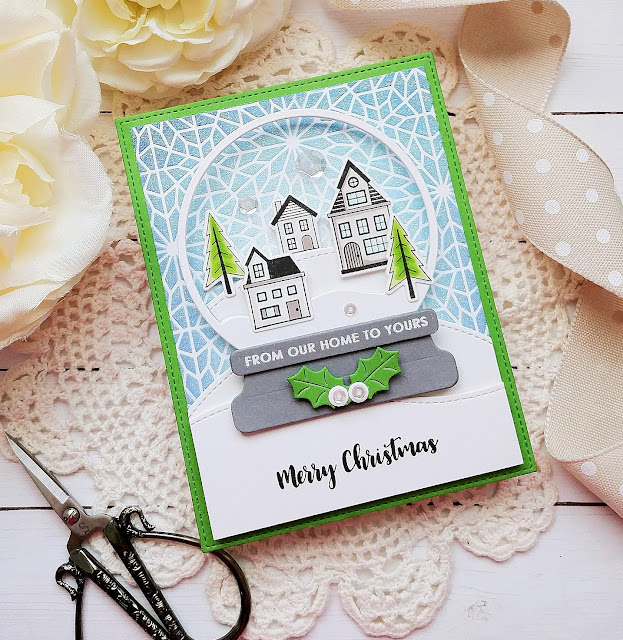 I also die cut the large green panel using the Card Front Element Builder SugarCuts. At this point, the stenciled panel was nice and dry and it was time to get the card put together! To begin, I added the snowdrifts to the bottom. The rounded portion is layered directly onto the stenciled panel using ScorTape. The glitter surface from the paste makes regular adhesive tricky, so make sure you use something strong. I added the other piece with the "Merry Christmas" sentiment using foam squares for dimension. Then I added the circle portion of the snowglobe at the top.I wanted to make sure I had enough room so I did that first. I was able to add the grey base easily after that. I added the extra snowdrift inside the globe, but I tucked it down a little bit so that you wouldn't see the harsh line where it was die cut at the bottom. The houses and trees were tucked here and there using glue and foam squares. A few sparkling clear sequins finish off this fun design! Thanks for fluttering by!

Posted by Kelly Lunceford at 10:01 PM

This is a beautiful card! The design is gorgeous.

I love how you used this stamp for your globe that is so sweet and love the background!

I LOVE this card...so cheerful and "homey"!

Hi Kelly! What a beauty! I read and re-read your instructions using the grid paper & Pixie Spray but since I’ve never attempted the process, I’m still stumped. (Not hard for me sometimes, that’s for sure). I adore you as an artist for many reasons, and your generosity is one of them. If you ever find the time to add a pic of the grid paper that you’re referring to, I’d be VERY grateful. But nevertheless, your card is truly original and so pretty! You are amazing!

Hi Stephanie, thank you so much! I actually added a picture of the grid paper in my Keeping Christmas post. It's the paper that is in the photo of my Ink blending. I guess I should have just said "scratch paper". The grid isn't important, it's just what's printed on it. I buy it from Stampin' Up!

Hi again! Kelly, you’re a treasure! I continually learn from you and am very grateful that you take the time to reply. Thank you so much. So, I checked out Keeping Christmas, which by the way, is a truly stunning post. I saw the grid paper and looked up Pixie Spray. Then I had that ah-ha moment. Lol. What a very smart and thought out process, especially when applying pastes. I also pre-ordered the blender brushes and caddy from Taylored Expressions, because of your posts. Next is to pick up a can of Pixie! Many, many thanks! God bless you.