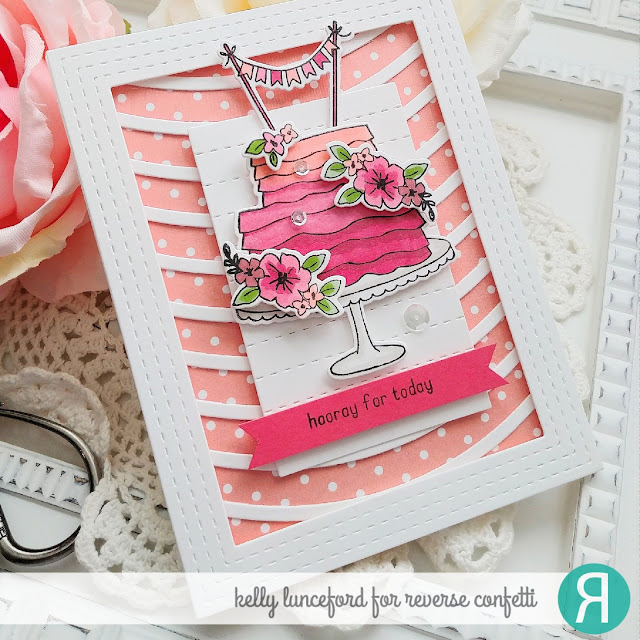 This month's Reverse Confetti Stock Your Stash Challenge theme is Birthday! As card makers, this is probably the most needed variety along with thank you and sympathy! My birthday card stash has grown considerably recently, which lets me know I haven't been great about sending them out! It also helped that the new Reverse Confetti release had a ton of awesome birthday sets! The one image that I DIDN'T get around to using, is this amazing birthday cake from the new Cake and Champagne stamp set. I was so excited to let it take center stage on today's design! 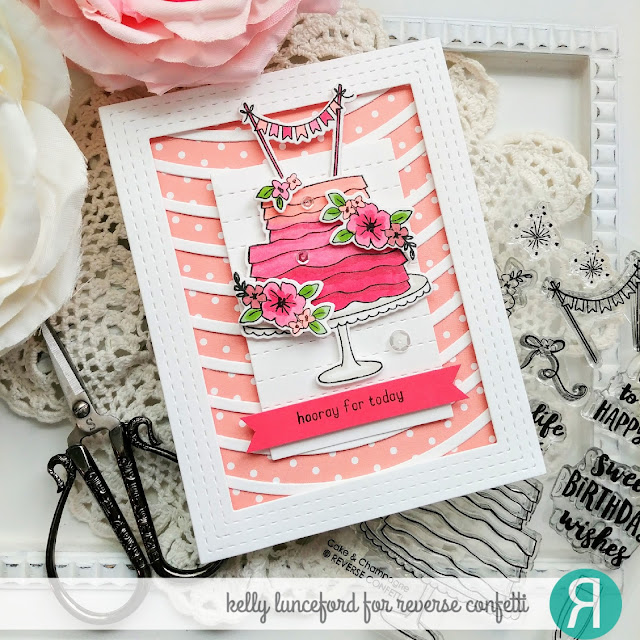 I searched online for images of "ruffle cakes" which yielded some beautiful results! I decided to use a pink ombre ruffle cake as the inspiration for the cake on today's card! I stamped the cake, the flowers and the banner topper in black ink and then colored them using Copic markers. One they were colored, I die cut them with the coordinating Cake and Champagne Confetti Cuts and set them aside to work on the other elements of the card. 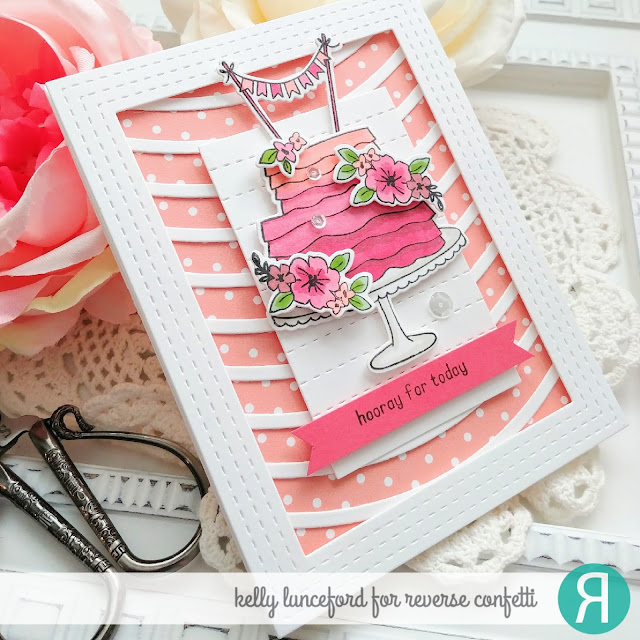 I decided to use the new On The Curve Cover Panel over a piece of Darling Dots pattern paper, but turned upside down. I guess there really isn't any "right" way to use this, but I used it the other way during the release as I think everyone else! LOL! I really  liked it turned this way because it helped reinforce the look and feel of the banner cake topper that is so cute! 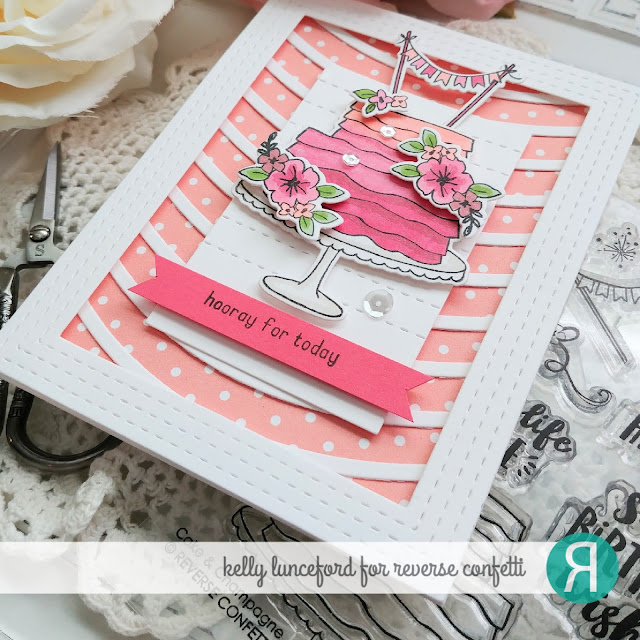 Since you all know how much I love the Stitched Note Frames, I just didn't want to let anyone down! LOL! I added it over the edges of the Cover Panel using foam squares for dimension. I also used the center "note" portion as the grounding layer for the cake. I was hoping to use one of the included sentiments, but because of the layout I chose, it just wasn't possible. Instead, I opted for a sweet sentiment from the So Many Sentiments stamp set. I did, however, use one of the included sentiments on the inside of the card, which you can see at the bottom of this post. 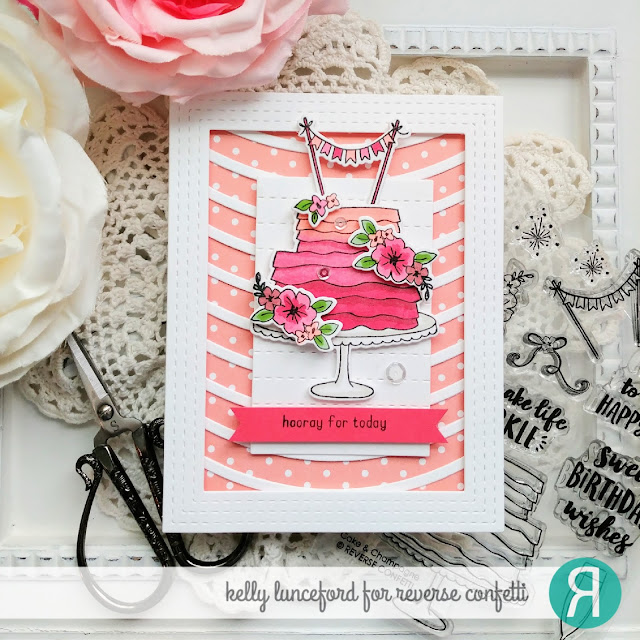 I arranged the flower clusters on the cake just as I would if I were decorating a real cake, the banner piece is glued behind the top of the cake using liquid glue. I added a few sparkling clear sequins and A LOT of Shimmer Spray! Normally I add it AFTER I take my photos, but since all of the colors are so light on the card, I knew it wouldn't cause a problem when I photographed it. 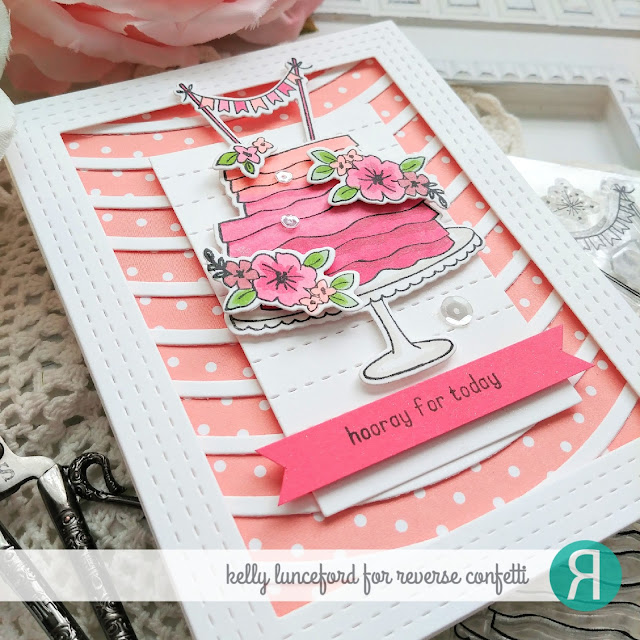 This design could easily be turned into a shaker card if you wanted. I created a shaker card using this Cover Panel during the release and it turned out wonderfully. The reason why I liked it so much is because the sequins were able to be confined in each "cell" so to speak. Sometimes shaker cards aren't as fun when everything just falls to the bottom. 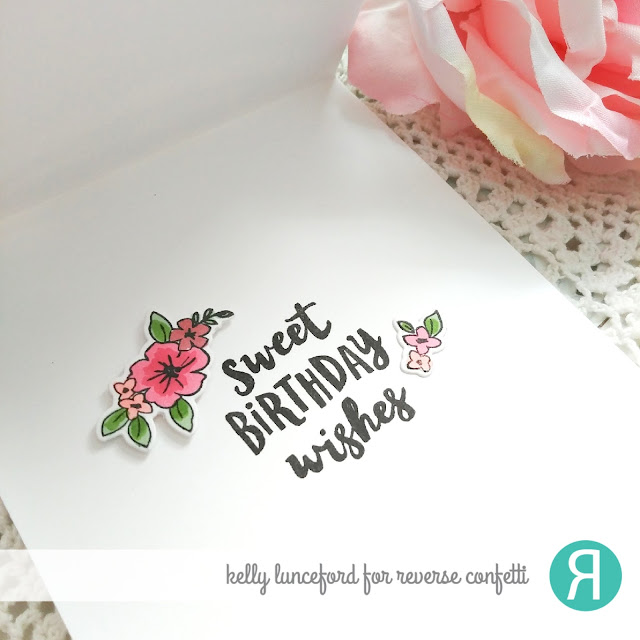 Here you can see the sentiment stamped on the inside. I always stamp more flowers than I end by using on the front, so I took the opportunity to add them to the sentiment. I hope you all get a chance to join us this month! Thanks for fluttering by!

Posted by Kelly Lunceford at 4:00 AM