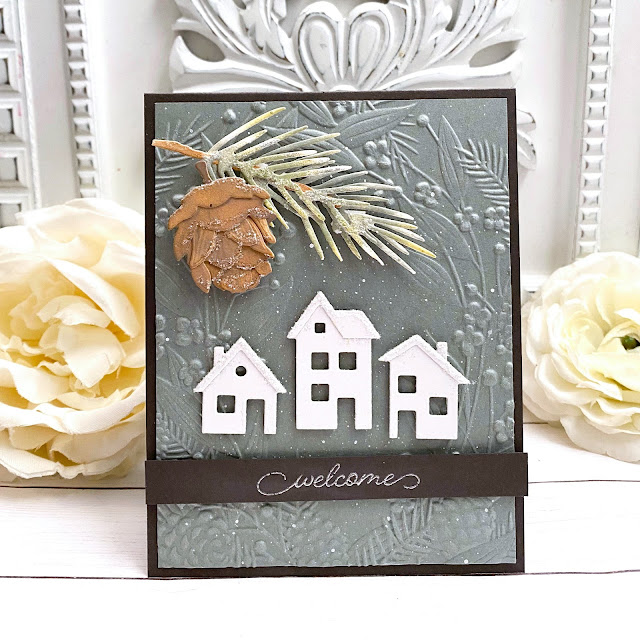 The cutest new couple moved into the neighborhood along with their super-precious twin baby girls! I couldn't wait to deliver a "welcome to the neighborhood" gift basket and card! I don't know if I've mentioned it or not, but I have a tendency of buying all of the stamps/dies/stencils/etc. that I fall in love with and they get sent to a specific "new product" basket that I have next to my desk. Unfortunately, this basket is bursting at the seams since I rarely get a chance to do "just for fun" creating! I decided to put a dent in the basket with today's card. I don't want to put the items away in their designated bins until I've actually USED them, otherwise they will be forgotten. Once I've created, photographed, and posted the project, the chances of me forgetting about a product are greatly reduced! Does this sound familiar to anyone? ha ha! 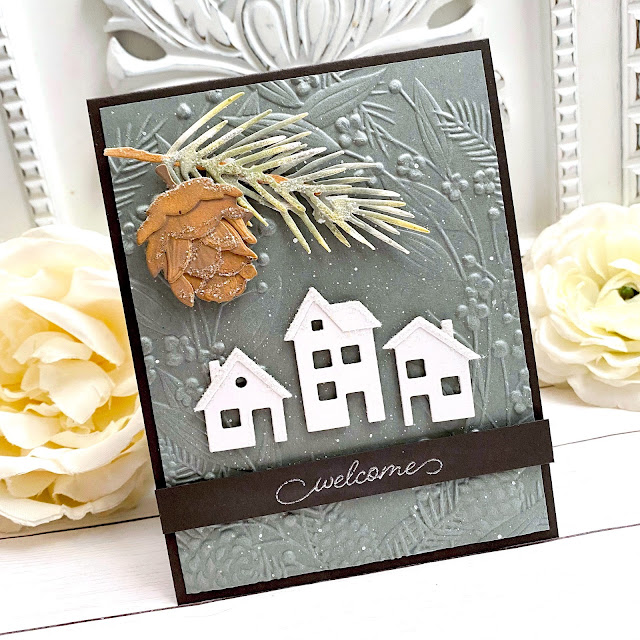 To begin, I used a beautiful embossing folder from Simon Says Stamp, which appears to be discontinued or out of stock. It was part of their holiday release; I snagged two others in addition to this one, so hopefully I'll get a chance to use those as well! ha ha! I used Stormy Sea cardstock which looks absolutely beautiful with this deep embossing! I added some white paint splatter for a snowy look. 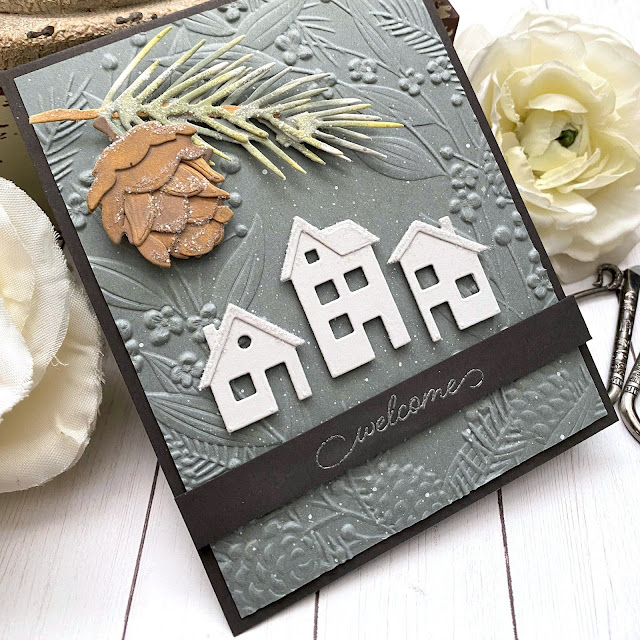 I die cut the houses from Soft Stone cardstock using the My Neighborhood Dienamics. I glued the corresponding roofs to each house using liquid glue and then added them to the embossed panel using foam squares. I probably should have waited until I added the sentiment strip, because after I edited these photos, I noticed they were wonky! oh well! ha ha! I gave the rooftops some glittery snow for some added detail and sparkle. 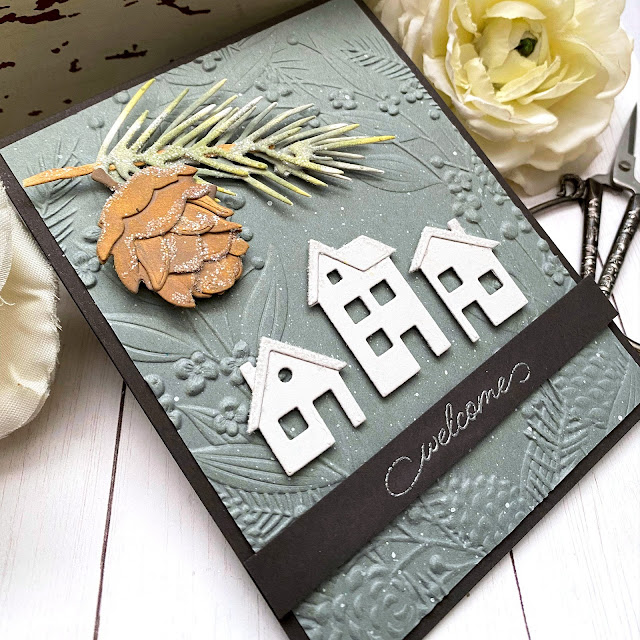 Speaking of the sentiment, I heat embossed the "welcome" sentiment from the Right at Home  stamp set onto a strip of Smokey Shadow cardstock using silver powder. I adhered it to the embossed panel using foam squares.  I almost left the card just like that; clean and simple, but then I remembered that I had an extra pine bough and pinecone left over from THIS card, so I added it to the top! 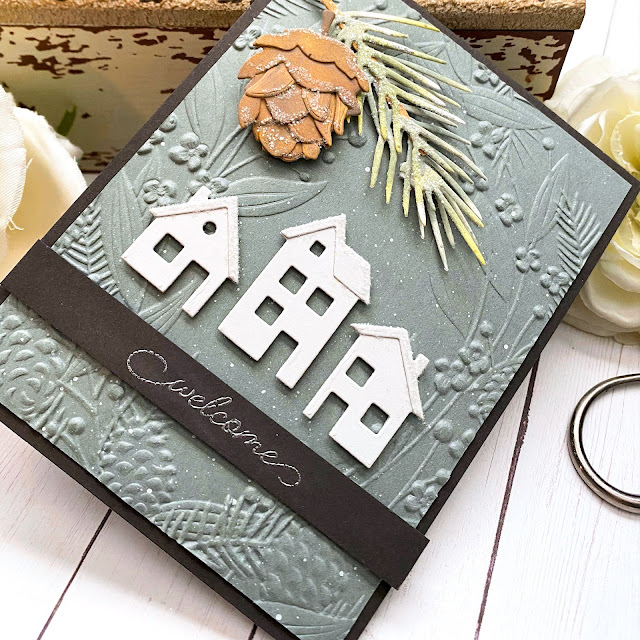 I'm really glad I remembered it because it enhanced the images from the embossed background so nicely! 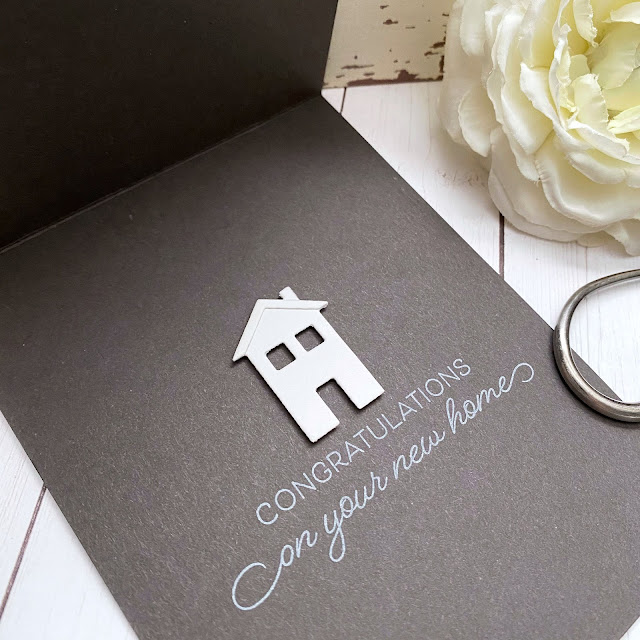 Since I had so many die cut houses left over, I decided to gussy up the inside by adding another sentiment and a cute little house! Thanks for fluttering by!
Posted by Kelly Lunceford at 5:00 AM

I Card Everyone said...

You 'had me' at embossing, Kelly! Isn't that just the loveliest why to welcome your new neighbor! Gorgeous!
=]

This is such a lovely card and a wonderful way to welcome your new neighbor! Love the colors, design and beautiful embossed bg.

Thank you so much 😊

Thank you so much 😊

I've always said "it's all in the presentation!" Your designs never fail to catch my breath and when I saw the inside view of your card I smiled to myself. A lovely card in all aspects. Lucky are those who have 'You' as their neighbor! And what a score that embossing folder was (she smiles) I love it!