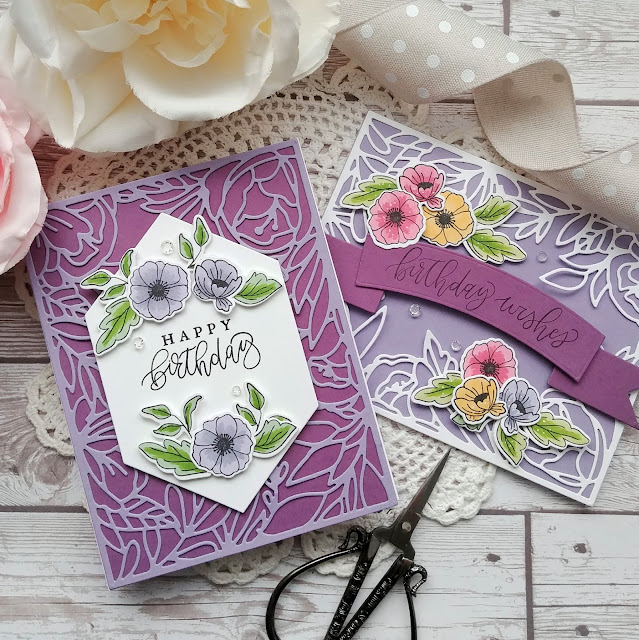 Well friends, today is the 4th and final day of the Ink to Paper July release countdown! I've got a lot to share with you today, so make sure you scroll to the end of the post to see all of today's projects. I'm super excited about this new On the Border: Floral Bliss die and new birthday sentiment set! I had so much fun working on all of the projects using this new border! I have a post from last year that gives tips on die cutting these intricate dies that you can read HERE! 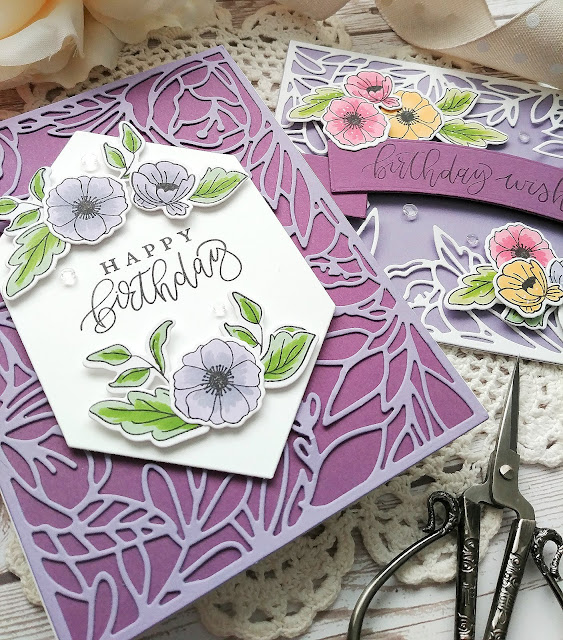 I had so much fun with this border, I decided to make 2 coordinating cards for my first project! I die cut the borders and then glued them onto panels measuring 4 1/4 by 5 1/2 inches. Both cards use the previously released Framing Florals stamp set and dies. 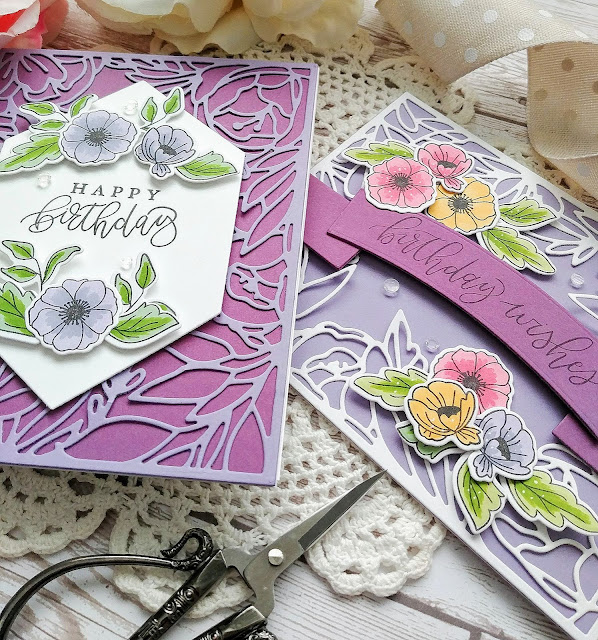 The birthday wishes sentiment is from the new "Pleasing Envelopes" set that I share more about at the bottom of this post, but I loved it so much I used it on this card! I used Copic markers to color the flowers, but the set does come with solid images so that you can stamp them easily. 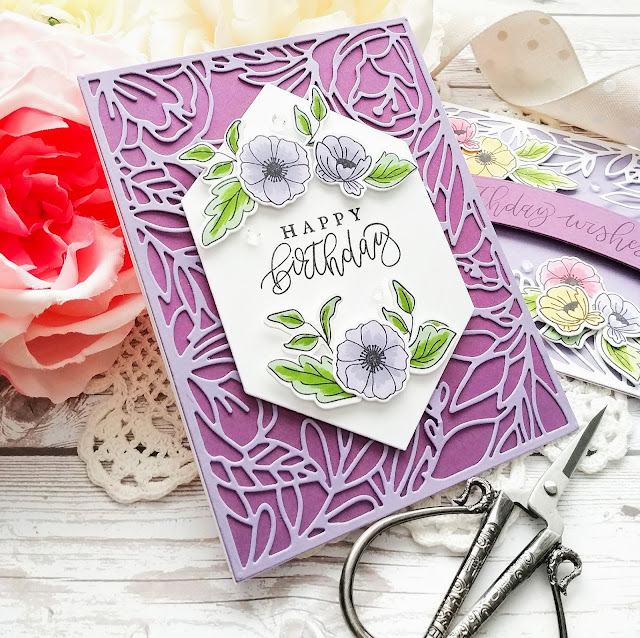 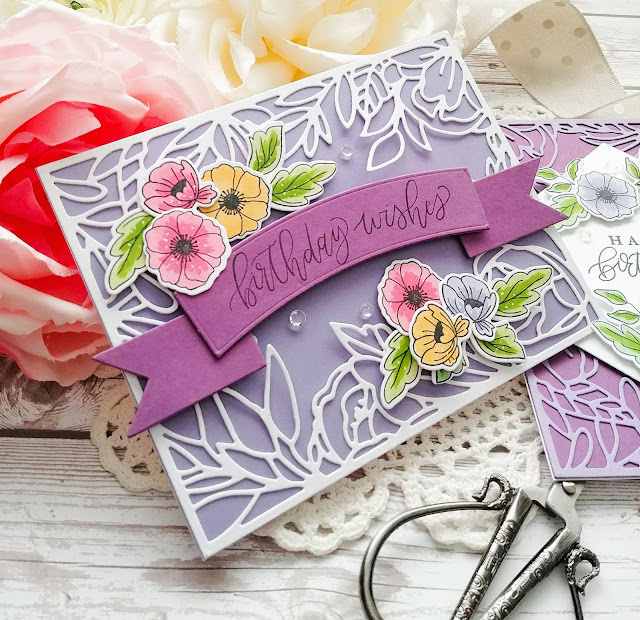 This one uses the new banner builder die set and I just can seem to get enough of it,either! 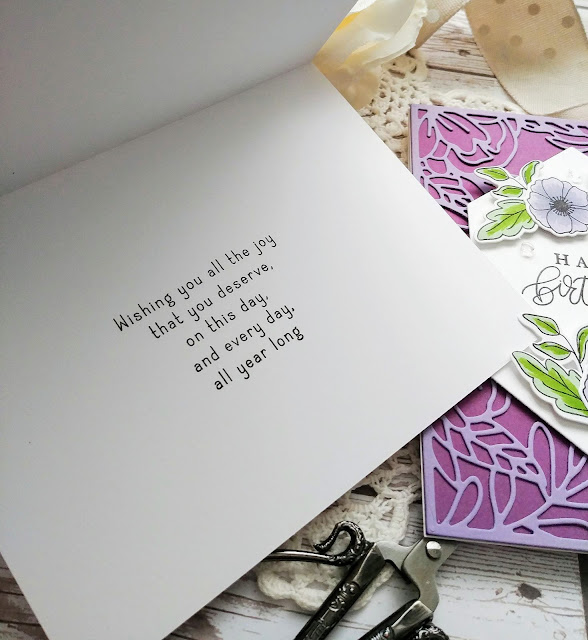 I used one of the inside sentiments that were showcased yesterday because that is how they are meant to be used! LOL! 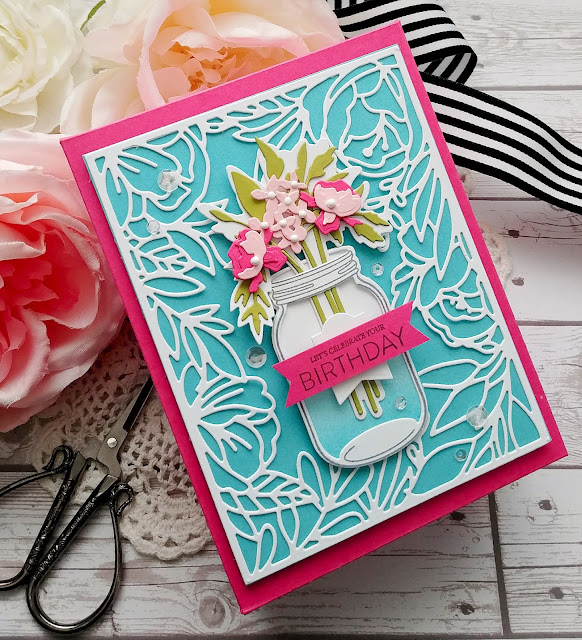 Up next is a fun box that I have been making for probably 19 or so years! I attended a class at a local scrapbooking store when my oldest son was a baby, so it is old! This template is not my own, but it's been so long that I'm not sure where to give the credit. Anyway, it is so easy to make and is the perfect size to hold a set of notecards and envelopes, which I have gifted many times. I also love to package up gifts inside these boxes as well,which is what I made today's box for. 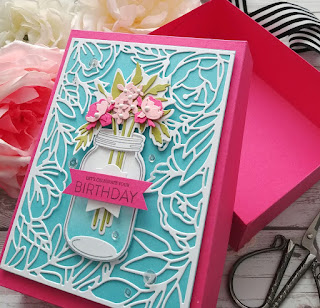 I used the On the Border: Floral Bliss to decorate the lid. After I was done, I realized what a cute card it would make! LOL! I die cut the border out of white paper and adhered it to a piece of Hawaiian Shores paper. I used the previously released Joyful Jars Mini Stamp Set and Tag Creations: Joyful Jars Die to decorate the middle of the lid. 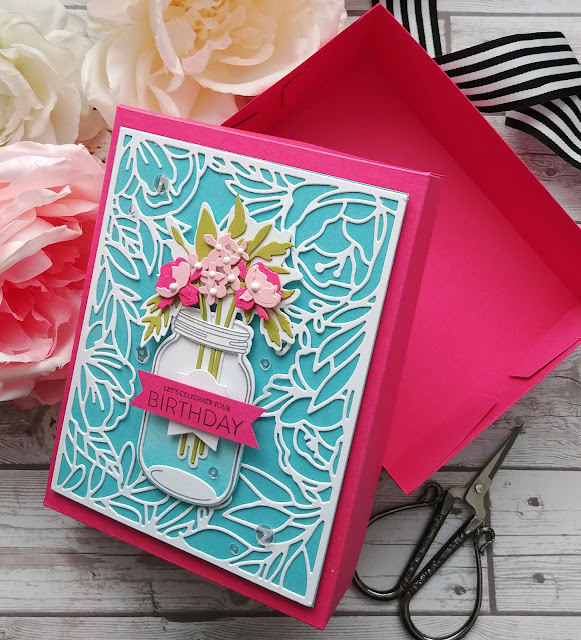 This sentiment is also from the new birthday sentiment set and is just perfect for this jar!  I added some Nuvo drops to the centers of the flowers for some added detail. 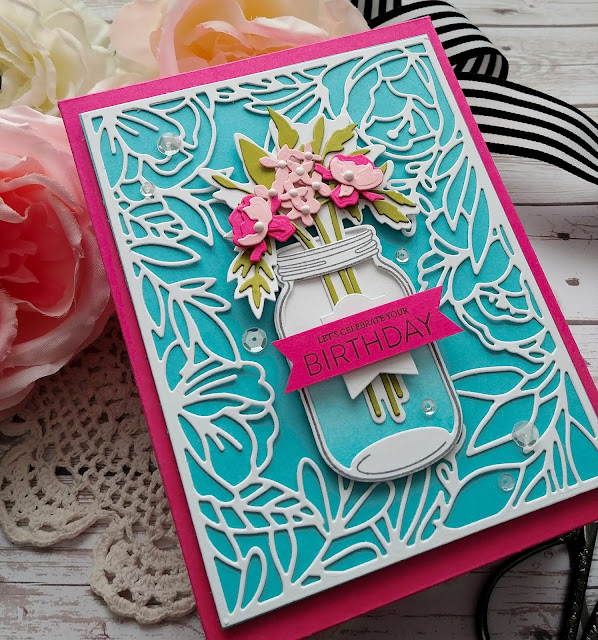 The bottom of the box is made by trimming off one inch from the bottom of a piece of 8 1/2 by 11 cardstock. Once that is done, score 2 inches on each of the four sides. Use a bone folder to make the folds crisp. Trim some "tabs" to fold in and glue. You can get a visual for this on the photo above. 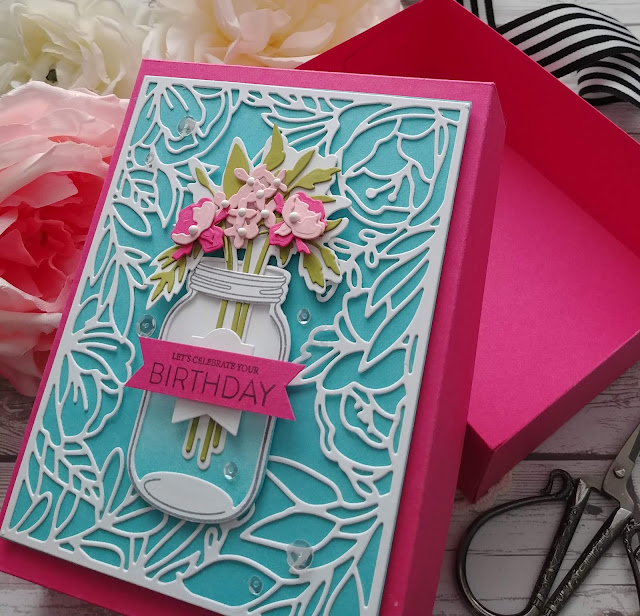 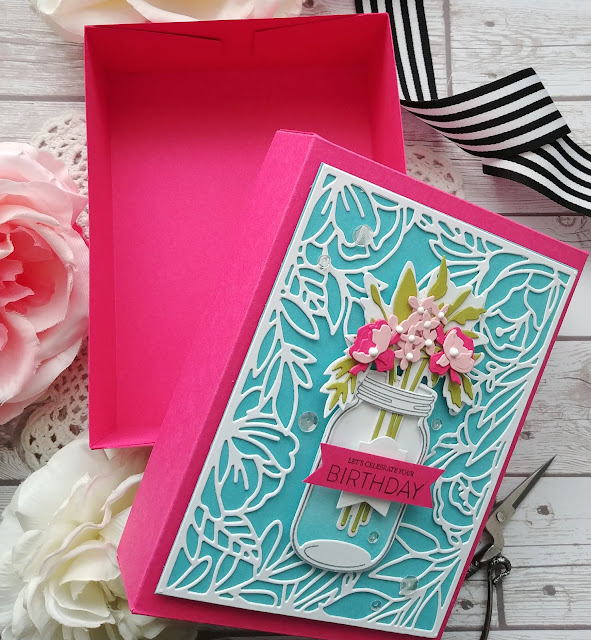 This photo gives you a better visual of how large the box is from this angle. It will hold quite a large stack of cards as well, depending on how thick they are. 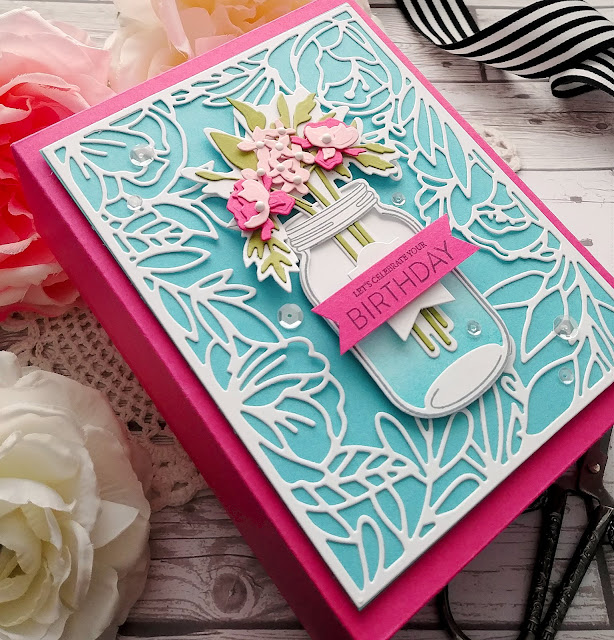 I added some sparkling clear sequins here and there for some shine and added detail. I added the die cut panel to the lid of the box using foam squares on the sides. I wanted to keep the middle free from obstruction just in case I decide to thread some ribbon through when I gift it. 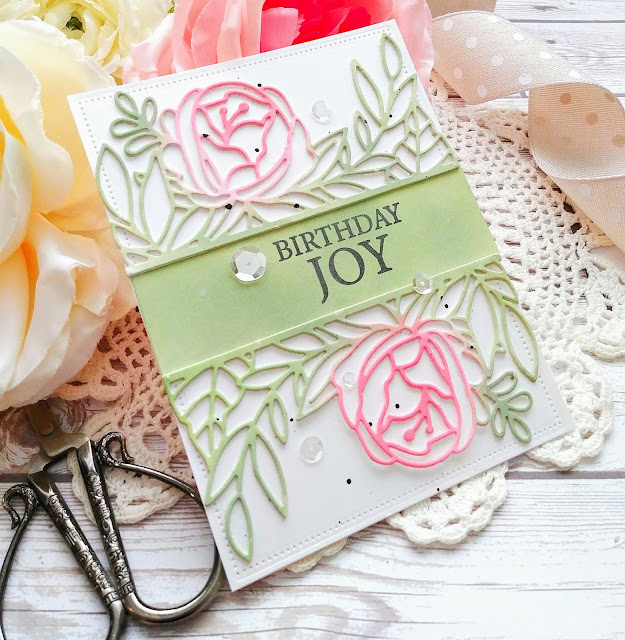 My last card using the On the Border: Floral Bliss die uses the smaller portion that is just the short width of a card. I die cut 4 of these out of white cardstock and glued two together. Once that was done, I did some ink blending to give it some specialized color. I also blended some ink onto a strip of white cardstock to create the sentiment panel . I used my mini MISTI to stamp the birthday sentiment. I had to stamp it MANY times to get a good impression over the Distress Oxide ink. 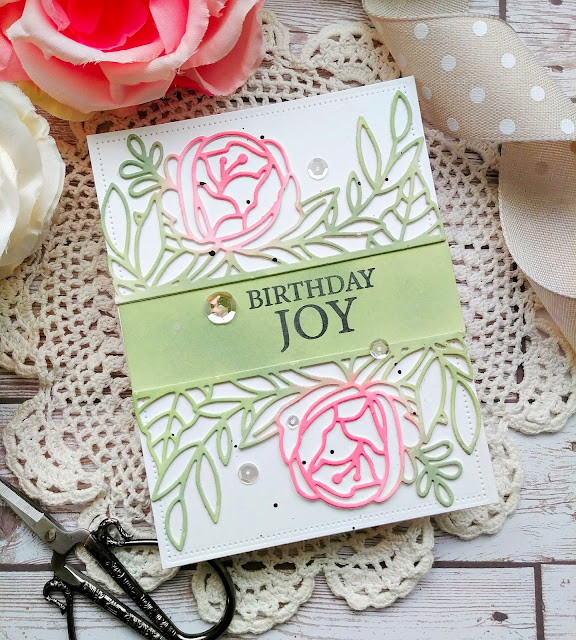 I moved the sentiment portion before I glued everything down and added some black paint splatter  for some added detail. Once that was dry, I added some Shimmer Spray over the top. 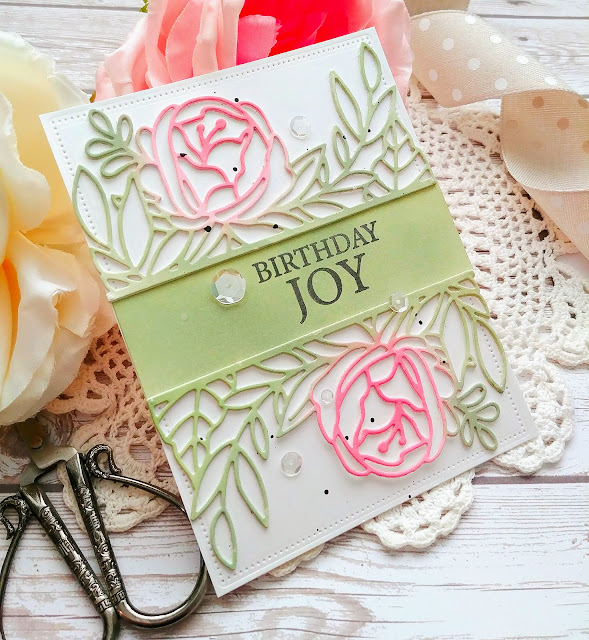 I added some sequins as well for some additional shine! 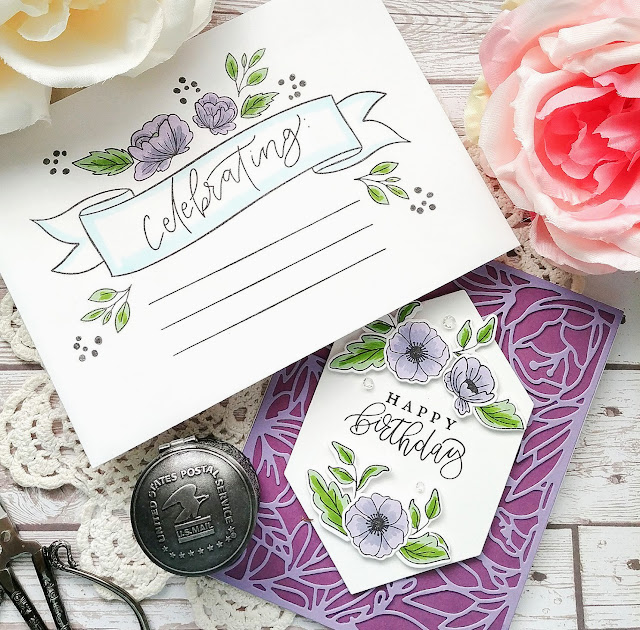 My last project for today is a set of envelopes that I created to coordinate with the two cards I shared at the beginning of this post. I used the new Pleasing Envelopes stamp set, which is so much fun! All of the different sentiments and design details are so beautiful and will make your outgoing mail so much happier! 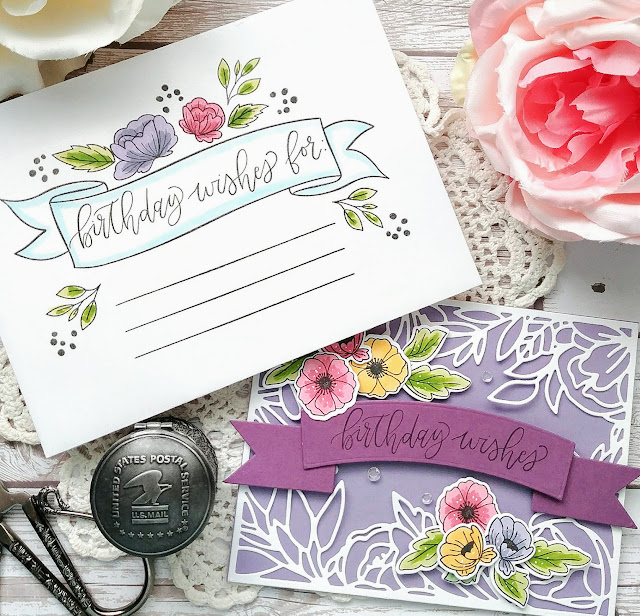 As card makers, we know how important the envelope is, but I rarely take time to make them pretty! I used to make my own coordinating envelopes to match the card, but over time, I stopped doing it. Honestly, I think I got sick of the comments made to me by people who put me down for the things I enjoyed doing! 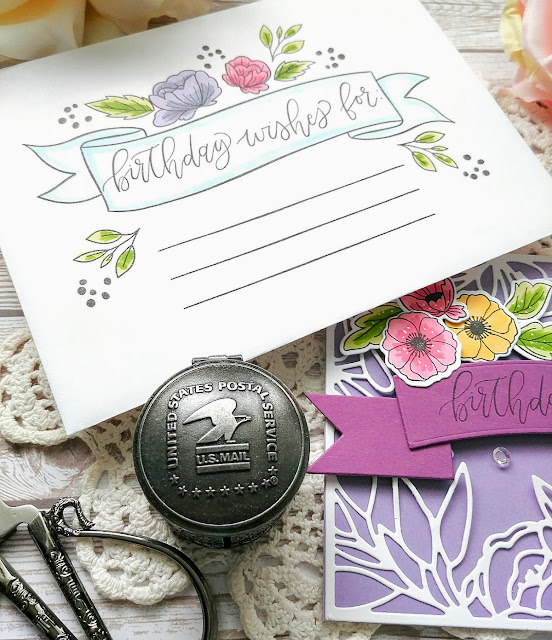 I hadn't really thought about that until just now as I was typing, so I hope I didn't put a downer on this post! LOL! You can see a sample of the envelopes I used to make in THIS post.  {I just read that post and I attributed my decline of envelope making to the crotchety old mail people at the post office! LOL!} It's probably a combination of both! 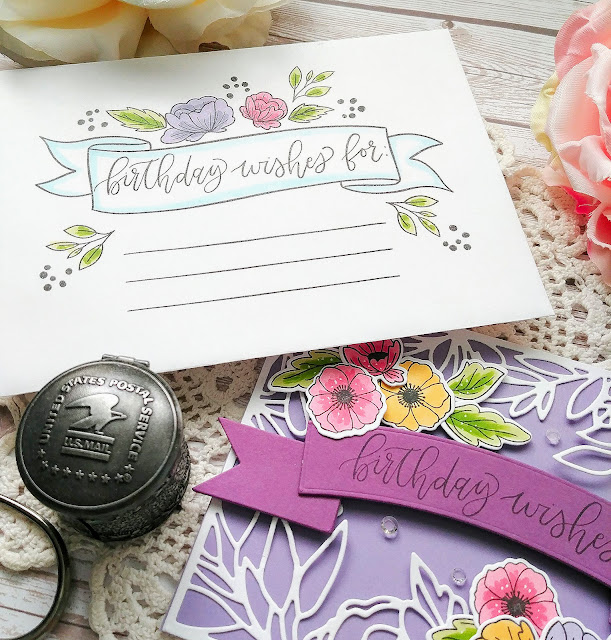 It is important when stamping your envelopes to put a piece of scratch paper inside so that the ink doesn't bleed through. It was actually my Copic markers that do the most bleeding, so if you choose to just stamp, you may be alright! 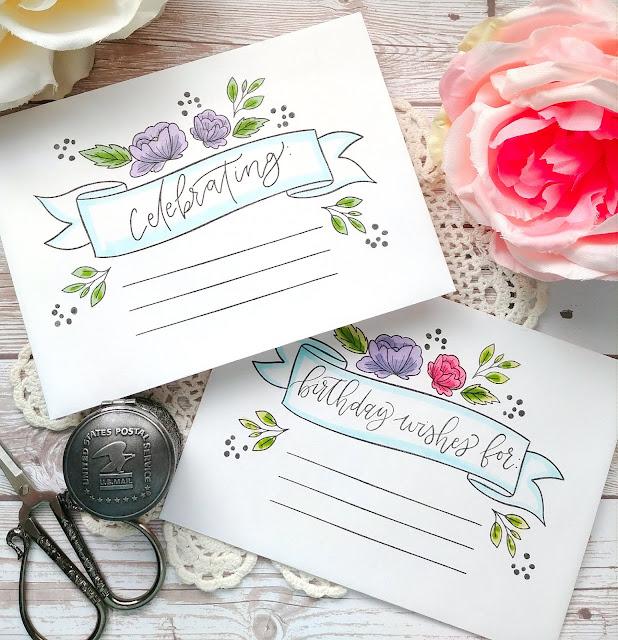 I had so much fun stamping and coloring these two envelopes! I hope you've enjoyed today's post! Everything will be available for purchase on the 15th! Thanks for fluttering by!

Wow, Kelly, I love every one of these gorgeous cards! The designs have really inspired me & am heading to Ink to Paper to check out some of these awesome supplies. Thanks for all the inspiration!

Thank you so much, Patti! You're so sweet!

Kelly...your card and matching envelope are my very favorite of the whole countdown! I also enjoy making envelopes to send my cards in and the Pleasing Envelopes set makes that so much fun. You inspire me...and many others, I'm sure. Don't ever stop sharing your creativity with others!

I love your envelopes!

Gorgeous cards. Love the colors and design of each one, plus the matching envelopes. TFS

Thank you so much, Kris! What kind words! You're so sweet!

Thank you so much, Vickie!

Thank you very much, JoAnn!

So impressed by your work! Love the box so much! Thanks for all your inspiration!!!