Lost in the Mail?

I have been anticipating the release of Card Creations 6, but when I never recieved my comp issue, I began scratching my head. It came out some time ago, yet I never could find it on the newstand. I had two cards accepted, but you never know if they will actually *use* them. So...I finally emailed the editor and found out that not only did I not get my comp issue, but my two cards that did indeed make it into the magazine, were lost as well. 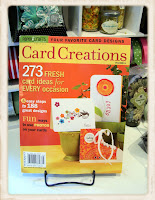 I was pretty disappointed, but finally got my issue yesterday. I thought I would share one of the designs that I had in there. There isn't any stamping on it...the sentiment is from some Crate Paper rubons. I had fun arranging all of the pretty buttons, though. Enjoy and I will try and fit some stamping time in today once my daughter gets home from Kindergarten. I wanted to stamp first thing this morning, but my son had his Ancestral Report on Scotland today, so I had to show up with his Kilt, and some Scottish shortbread to share with the class. Thanks for fluttering by!
Posted by Kelly Lunceford at 10:29 AM

That is so sad...I hope it turns up eventually!! Your card is AWESOME though!!

Congratulations Kelly, I love the textures and colors. Naturegirl

I really like the button card and the clever way you put it all together. It's a great idea and one I will definitely use!

Darling Card!!! You deserve the recognition for sure. I hope PaperCrafts team gets their act together and finds your cards and money soon!

Your card is so stinkin' cute! Love that idea! Congrats on making the magazine!

This card is totally adorable!!!

what a bummer! I've missed out on two Papercrafts magazines. They did extend my subscription both times, so that helped some. Sure hope yours turns up!

What a great way to use buttons!