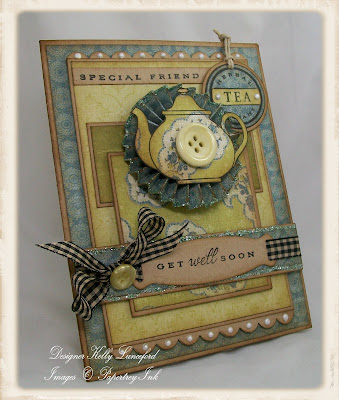 I was still in a "Vintage" frame of mind when I created my card for this week's SFYTT. I am in love with Jen's new sketch, but I think I say that every week. She is one talented gal and I feel quite fortunate to be part of her team. I haven't used Tea For Two in quite a while and as you know it is one of my All-Time Faves! I always use it in the same type of way, but I just can't help it. 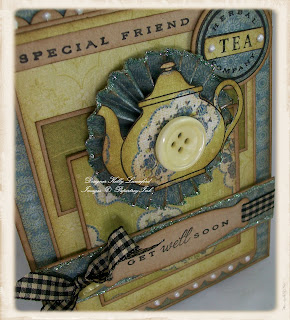 I pulled out some of my favorite vintage prints from K & Co. and got to work. I knew that I wanted to create an accordion medallion for the circle piece from the sketch, so I got that done first so it would have time to dry. I also added the same glitter down on the sentiment panel at the bottom, so I let that dry, too. I really need to invest in some of these (the ones that go with this set)to make my life easier when cutting out that darn tea pot. 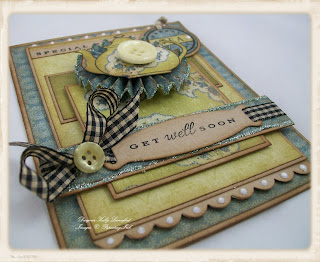 I also added some liquid pearls as I did on my card in my previous post. I had someone ask how I got my liquid pearls to go round, rather than pointy. The fabulous Amy Sheffer gave me the fabulous tip to lay the paper horizontally, then flick your finger under the paper to get them to settle. It is kindof the same concept as tapping your chocolate molds to get the bubbles out. I hope that makes sense, because it really, really works! Thanks again, Amy! I am making up for lost time using these on all of my projects since they have been sitting un-used for some time. You won't want to miss the other gals creations!
Jen Del Muro and New September Guest Designer
Amy Rohl
Susan Liles
Amy Sheffer
Leigh O' Brien,
Jenn Diercks,
Amber Hight
Megan Lock
Sony Christoph
Jodi Collins
CAROLE
Thanks for fluttering by!

P.S. I am off to this week's football game! Last week they won 77-0, which caused quite a controversy. Our team has been put on probation and we are limited to a 35 point spread from here on out.
Posted by Kelly Lunceford at 10:34 AM

I look forward to your posts every week, another wonderful card! Thanks for all the inspiration!

Wow, this card is amazing!! Must weigh a ton with all those layers! Love the DPs, colours and that tea pot is too cute! Wonderful card. Thanks for the liquid pearls tip from Amy too.

I hate when they tell teams that are good that they have to stop scoring. That happens in the soccer games here too. Enjoy the game!

Your card is adorable. I love those tea pots and the colors are fabulous.

Thanks for the answer on the pearls. I am going to try it as I also have a bunch that have been hanging out and doing nothing. Love that card. So pretty!

This is gorgeous! Love the deep rich colors!

Another wonderful Tea card Kelly. The colours are lovely - you have such a great eye for colour combinations. Thanks to you, I am going to have to bite the bullet and get this set. (Postage to Australia is frightening). Thanks for your inspiration.
Mary

Oh wow...every time you use this set, it is just magical!!! Love every inch of this one, esp your paper mix and the button on the teapot!

LOVE this stunning card, definitely makes me want to go and make a cuppa :)

This is just STUNNING!!

Beautiful card, so many awesome details to look at.