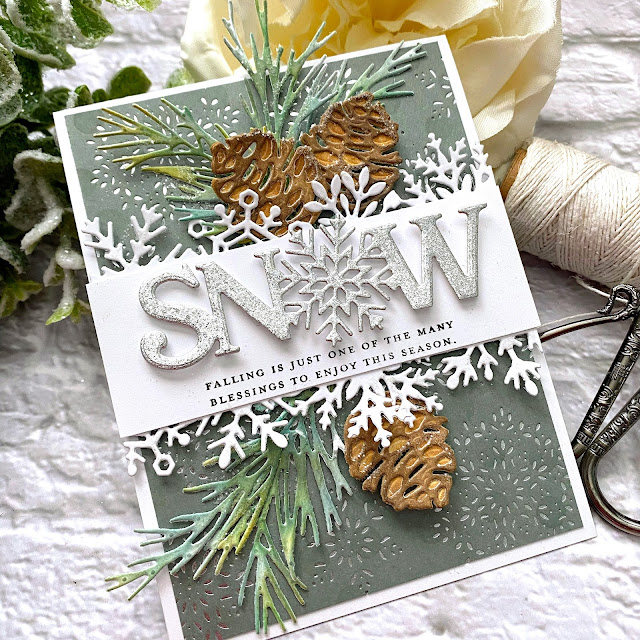 Hello and welcome to day one of the Papertrey Ink November release countdown! I have two winter/holiday cards to share with you today using so many fun products from this month's release! I was tempted to play a little Christmas music while working on these cards, but decided to wait just a little bit longer! How about you...have you started listening to Christmas music yet? 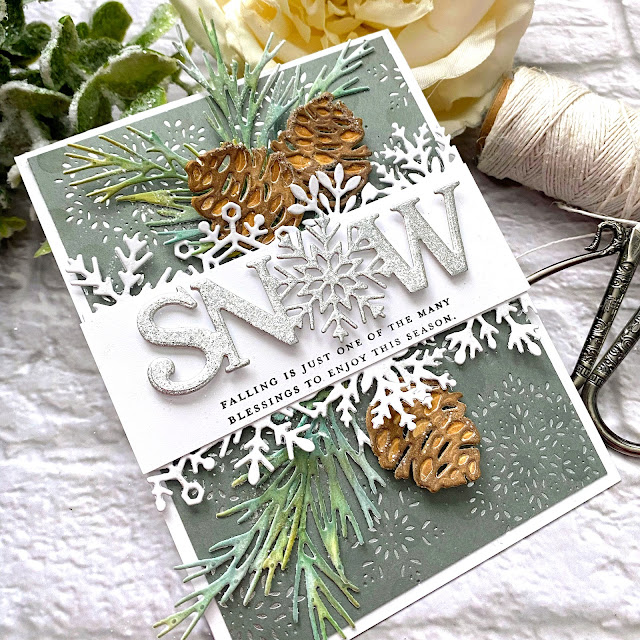 My first card for today was such a fun one to create; I used the beautiful new Larger Thank Life: Snow die paired with the new Larger Than Life: Snow Sentiments mini stamp set. My card also features a beautiful new set of dies called Snowflake Banners; I chose to use the smaller of the 3 sizes because it fits nicely across the front of a top folding A2 card base. The other two dies in the set would work well for a horizontal card. 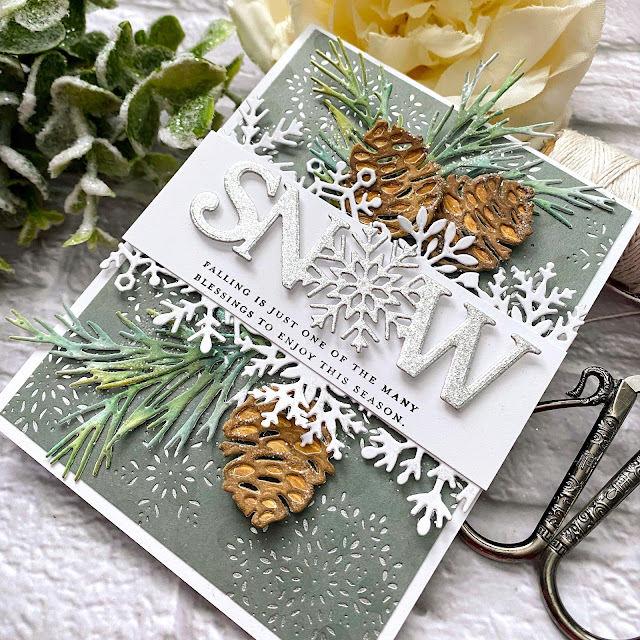 To begin this card, I cut a 4 by 5 1/4 inch piece of Stormy Sea cardstock and stenciled it using the new Playful Dots stencil set using Stormy Sea ink. Once that was done, I foiled it using the previously released Fanciful Snowflakes Hot Foil Plate (can I just say I am absolutely SHOCKED this has not sold out?). The dot pattern is subtle in the picture, but in real life you can see it better. 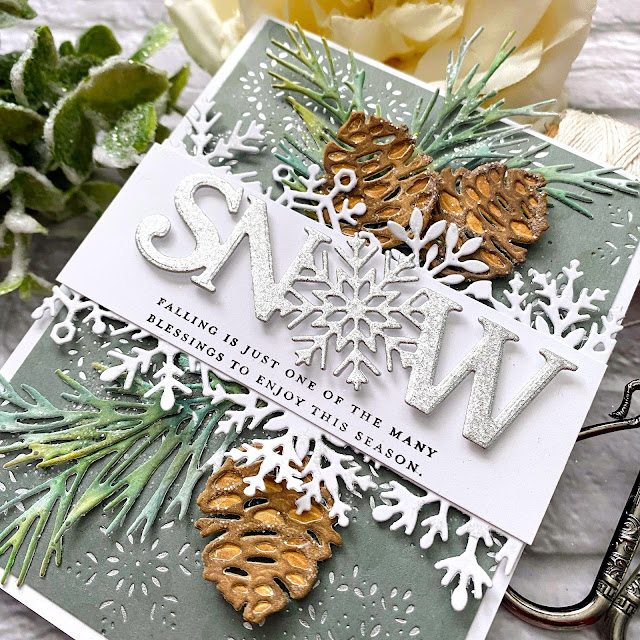 I die cut the SNOW word using both white cardstock and silver glitter cardstock and glued them together using liquid glue. I also die cut the Snowflake Banner from white cardstock and then added another strip of cardstock over the top. I wanted to use this particular sentiment, but the Snowflake Banner die was slightly too small to have it look good. Doing it this way allowed me the extra room I needed to stamp the sentiment (from the Larger Than Life: Snow Sentiments mini stamp set) AND have the large SNOW die above. 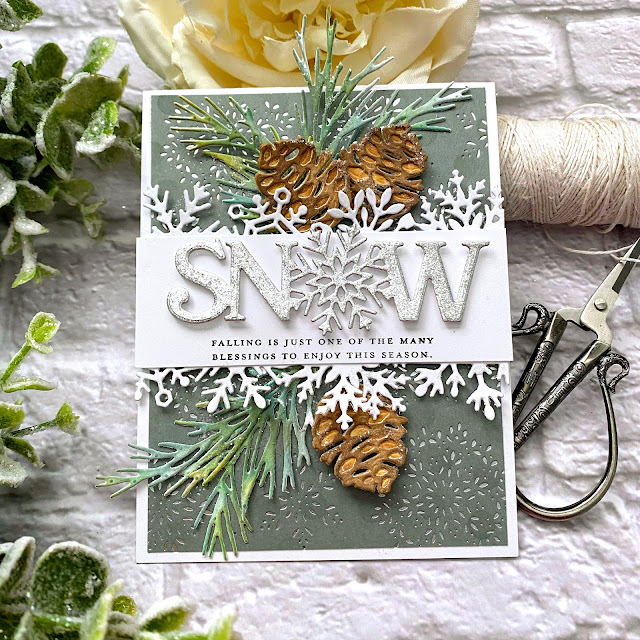 I added the entire banner onto the background panel using foam squares so I could tuck the greenery behind it easily. I die cut the pinecones and pine branches using the Into the Blooms: Pine dies and colored them with assorted Distress Oxide inks. 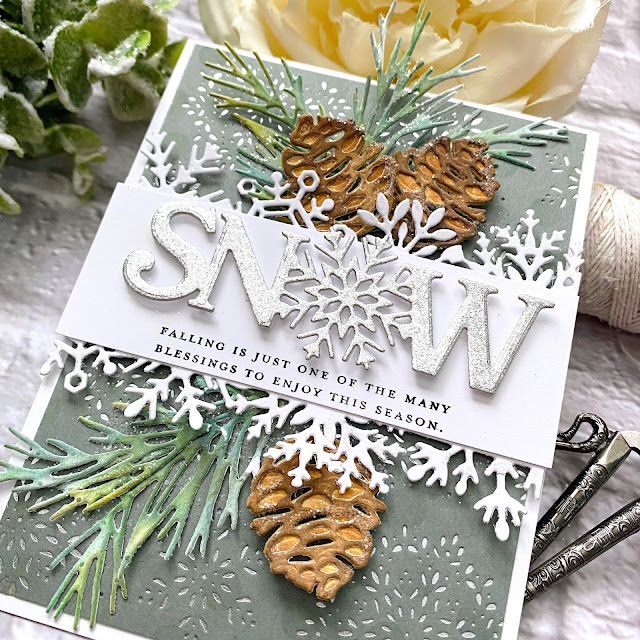 I tucked them here and there using liquid glue for the branches and foam squares for the pinecones. 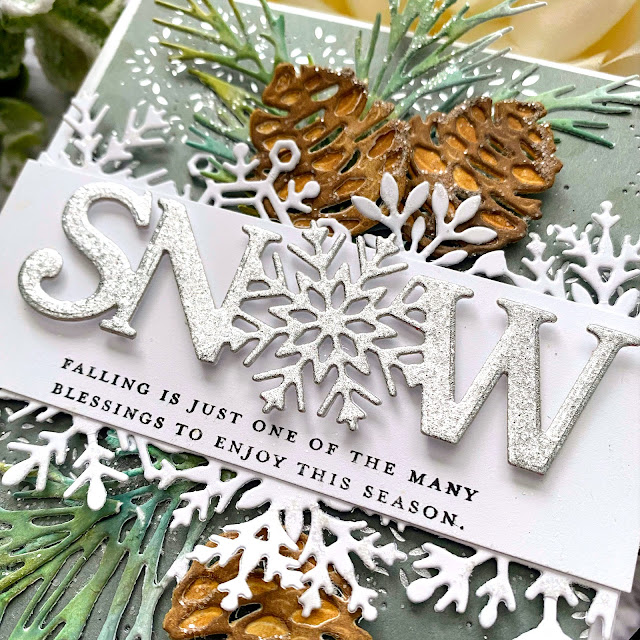 I added glitter to the pine branches, pinecones, and the edges of the Snowflake Banner. 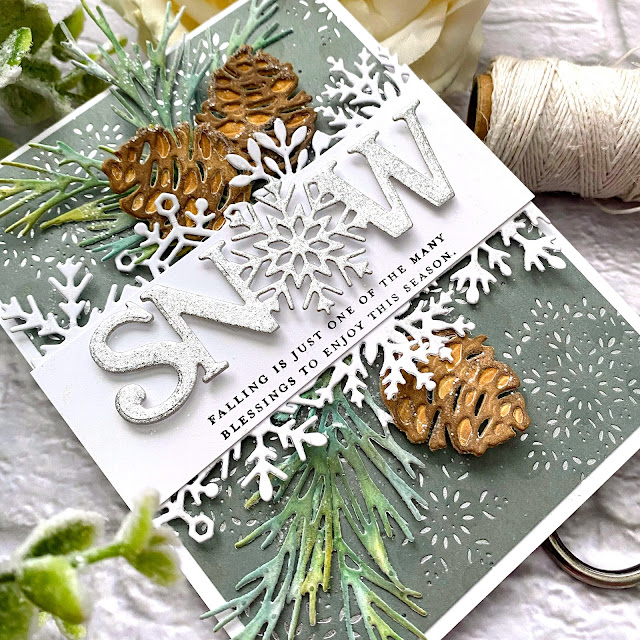 I added the entire background panel to a top folding A2 card base using liquid glue. 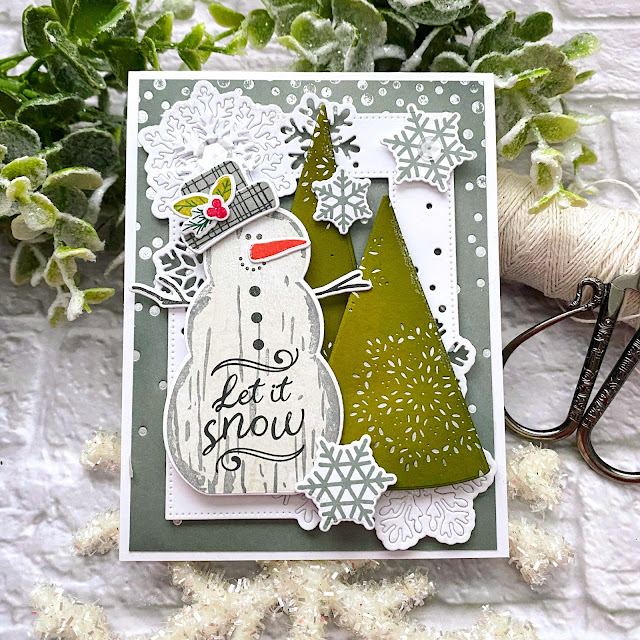 Next up is something a little bit playful; this card uses the new Simply Snowmen paired with the new Simple Trees dies and the new Snowflake Fun frame die. 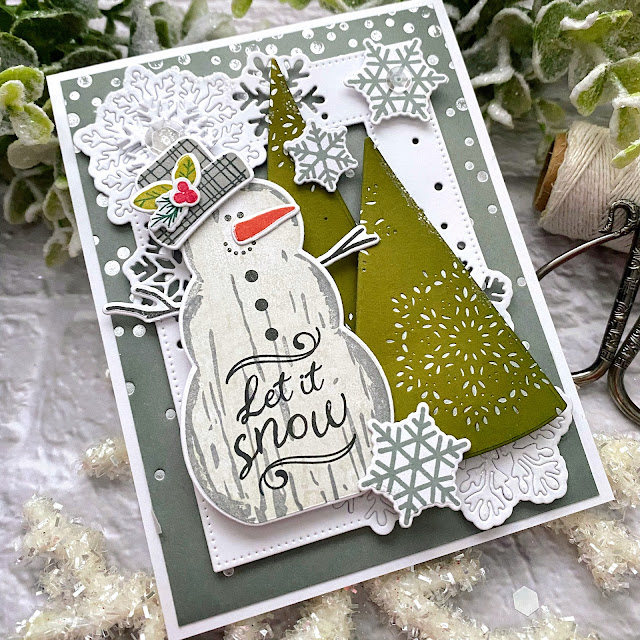 The Simply Snowmen stamp/die set includes two different sizes of snowmen; this one features the larger size. I ended up stamping 4 snowmen total; two little and two of this larger size. In the end, my card only looked good with one, so I have a few more to use on future projects. I dressed him up by stamping the "Let it Snow" sentiment; one of three included sentiments. I also added his carrot nose, twig arms, buttons, and finally, his hat with foliage and berries. 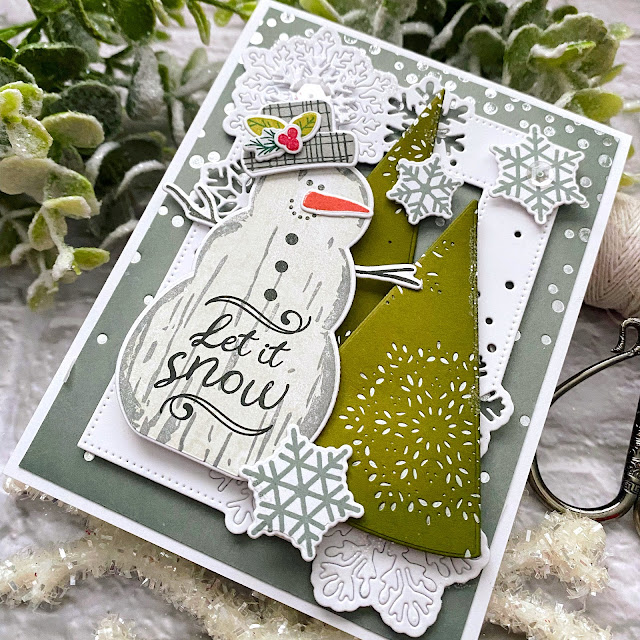 I hot foiled an A2 panel of Ripe Avocado cardstock using the Fanciful Snowflakes Hot Foil Plate (linked in my first card) and then I used the new Simple Trees die set to cut out the trees. I just love the detail it adds to these sweet trees! I also added a bit of Olive Twist ink to the outer edges of the trees to give a bit more dimension. 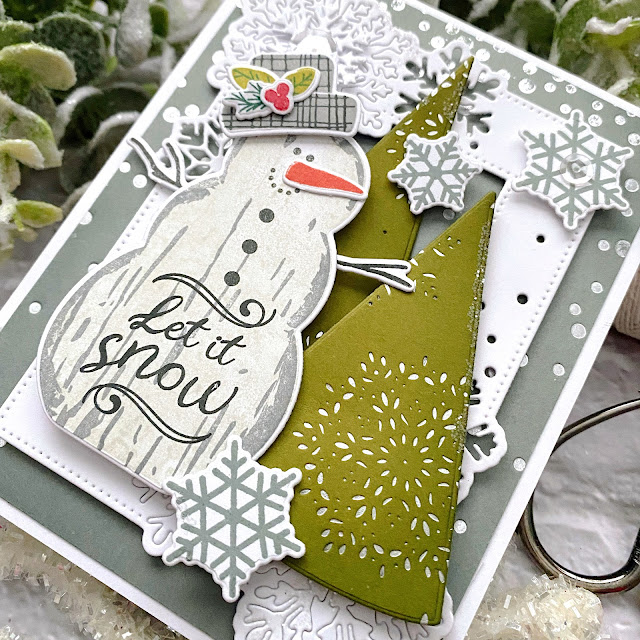 I die cut the Snowflake Fun frame from white cardstock, selectively punching out some of the snowflakes and leaving others intact. I wanted to keep the card grounded and felt that leaving some intact would help. I also added a few of the snowflakes that are included in the Simply Snowmen stamp set. The background was created using the new Cascading Dots Hot Foil Plate; silver foil on Stormy Sea cardstock.
Thanks for joining me for day 1 of the November countdown! Thanks for fluttering by!
Posted by Kelly Lunceford at 5:00 AM

Great cards, Kelly!
Love the new products, especially that SNOW die.
Love your inspiration.
Thanks, and have a wonderful day.

I love that background to your snow card and the silver touches along with the pinecones.
The snowman card has a great rustic feel!

Swoon! Kelly, this is the prettiest card! I love EVERY detail, and I am finally buying ocean tide cardstock. I've admired it for far too long!

Both of your cards are beautiful but since I am a big fan of botanicals, my favorite is the pinecone card. Great color and dimension. I would be thrilled to receive a card like this!